The engine and gearbox 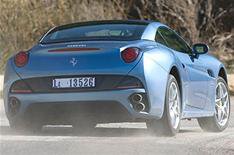 Outwardly, the 4.3-litre V8 may appear to be a hand-me-down from the company's mid-engined cars, but don't be deceived. It's an all-new direct-injection unit tuned for flexibility rather than outright power less high-revving, but more torquey than the other Ferrari V8s although with 460bhp, it's hardly undernourished.

With the new seven-speed double-clutch automated gearbox (you can have a six-speed manual if you must), it's part of a brilliant double act.

You can amble along with the traffic in seventh gear at less than 40mph; alternatively, you're free to stretch the engine to 8000rpm before having to upshift. In-between, you have what feels like infinite flexibility.

There are two gearchange options: use the steering wheel-mounted paddles, or let the 'box perform as a full automatic.

The trouble with most similar systems is that in auto mode, shifts are slurry and jerky, and anything but things of beauty. Ferrari's system works so quickly that however you use it, changes are imperceptible.