More for you |
Used Car of the Year Awards contenders: hybrid carsBest used hybrid cars (and the ones to avoid)Most reliable used hybrid carsCatalytic converter theft - why is it so common? Lexus readying first electric car for 2020 launch
Home
News
Toyota Prius in global recall
news 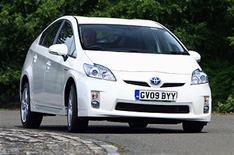 Toyota has confirmed a worldwide recall of its flagship Prius hybrid.

The recall affects more than 8500 Prius hybrid cars sold in the UK.

A Toyota spokesman said: 'We have decided to recall as we regard safety for our customers as our foremost priority.'

Brakes fail
Owners have reported problems with the Prius's brakes, claiming that they appear to 'momentarily fail' on bumpy or slippery surfaces.

Toyota says the problem is a software glitch within the car's anti-lock braking system (ABS). The manufacturer also claims that braking and safety is not 'compromised'.

The problem with the brakes can be easily rectified with an update to the software in the Prius's brake control system. This was put in place on the Prius production line from late January 2010.

What cars are affected?
The recall affects the latest third-generation Prius built before January 27, 2010.

What next?
Toyota will write to every owner or keeper of affected vehicles in the next few days having obtained their contact details from the DVLA.

Advice for UK Prius owners
If you own a Toyota Prius and want more information on your car, contact Toyota's Customer Relations on 0800 138 8744.