More for you |
Catalytic converter theft - why is it so common? Lexus readying first electric car for 2020 launchBest used hybrid cars (and the ones to avoid)2019 Toyota Prius AWD-i review - price, specs and release dateUsed test: Hyundai Ioniq vs Toyota Prius
Home
News
Toyota Prius may be recalled abroad
news

Toyota Prius may be recalled abroad

* Hybrid may be recalled * Braking problems confirmed * Cars in US and Japan affected... 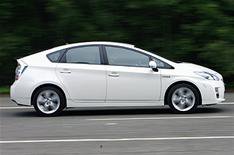 Toyota may recall some of its 2010 Prius hybrid models in the US and Japan after admitting brake problems with some cars.

It follows the recall of more than eight million cars worldwide following an accelerator problem.

More than 100 owners of the new Prius in the US reported braking problems, in which the brakes were either slow to deploy, or worked unevenly.

Although the company claims to have fixed the problem in vehicles sold since January, the new model went on sale in May 2009.

'There are reasons to believe that a recall could be put in place [in the US and Japan], but it's still early hours and early days,' said Toyota UK's managing director Miguel Fonseca.

No UK cars are reported to have been affected.

Catalytic converter theft - why is it so common?

Best used hybrid cars (and the ones to avoid)