Want to ditch diesel, but still save money on fuel? One of these used petrol-electric cars could be the answer...

Also sold as the Vauxhall Ampera, the Volt can manage a claimed 50 miles on battery power alone.

Unlike the normal Prius hybrid, the Plug-In has a bigger battery that you can charge up from the mains.

Until now, if you’ve needed to shift your family for as little cash as possible, the obvious answer has been to choose a diesel of some description. However, with the prospect of charges for using older diesel cars in towns and cities, some used car buyers are understandably getting nervous about the prospect of choosing one as their family transport for the foreseeable future.

But of course, older petrol cars, while a safer bet and cheaper to buy, are also a good deal thirstier. So what about a hybrid?

With their low emissions and high fuel economy, petrol-electric cars like these seem to offer the best of both worlds, and with practical, five-seat hatchback bodies, most make a compelling case in today’s anti-diesel world. But are they any good? Well, we’ve brought together two of the most popular to find out.

Think of a hybrid, and the model that will pop into most people’s heads will be the Toyota Prius. It’s become the go-to hybrid car, and its popularity on Britain’s roads is no accident. We’ve tested it here in plug-in form, which offers a bigger battery and the ability to charge it up from the mains, meaning you can in theory drive completely without the need for petrol.

The same can be said for the Chevrolet Volt. Also sold as the Vauxhall Ampera, the Volt isn’t in fact a hybrid, but a range-extended electric car – which means it runs primarily on electric power, but as well as accepting it up from the mains, it uses its petrol engine like a generator to charge up the battery.

The means might be different to the Prius, but the end result – in theory – is similar: you can use electric power until you run out, at which point you’ve got a petrol engine to back you up.

Although neither of these ars is shackled by its electric range, buying one tends to make the most sense if you can do most of your journeys on battery power. Otherwise you’ll just be using extra petrol to lug around a load of flat batteries.

On that basis, the Prius gets off to a bad start, because we managed only 13.4 miles (Toyota claims 15.5) before the petrol engine cut in. In colder weather, when the battery’s less efficient, you’ll be lucky to get 10 miles per charge.

That makes the 45.4 miles we achieved in the Volt look very impressive. In fact, it’s not far short of Chevrolet’s claim of 50 miles. Again, don’t expect to get that far on a frosty morning, but a range of at least 30 miles should be possible in most conditions.

In pure electric mode, the Toyota delivers its peak torque the moment you hit the accelerator, so it’s surprisingly nippy around town. However, it isn’t as well suited to A-roads and motorways, because its petrol engine kicks in automatically if you go above 51mph. The same also happens if you need more power than the electric motor can muster – to get you up a steep hill, for example. 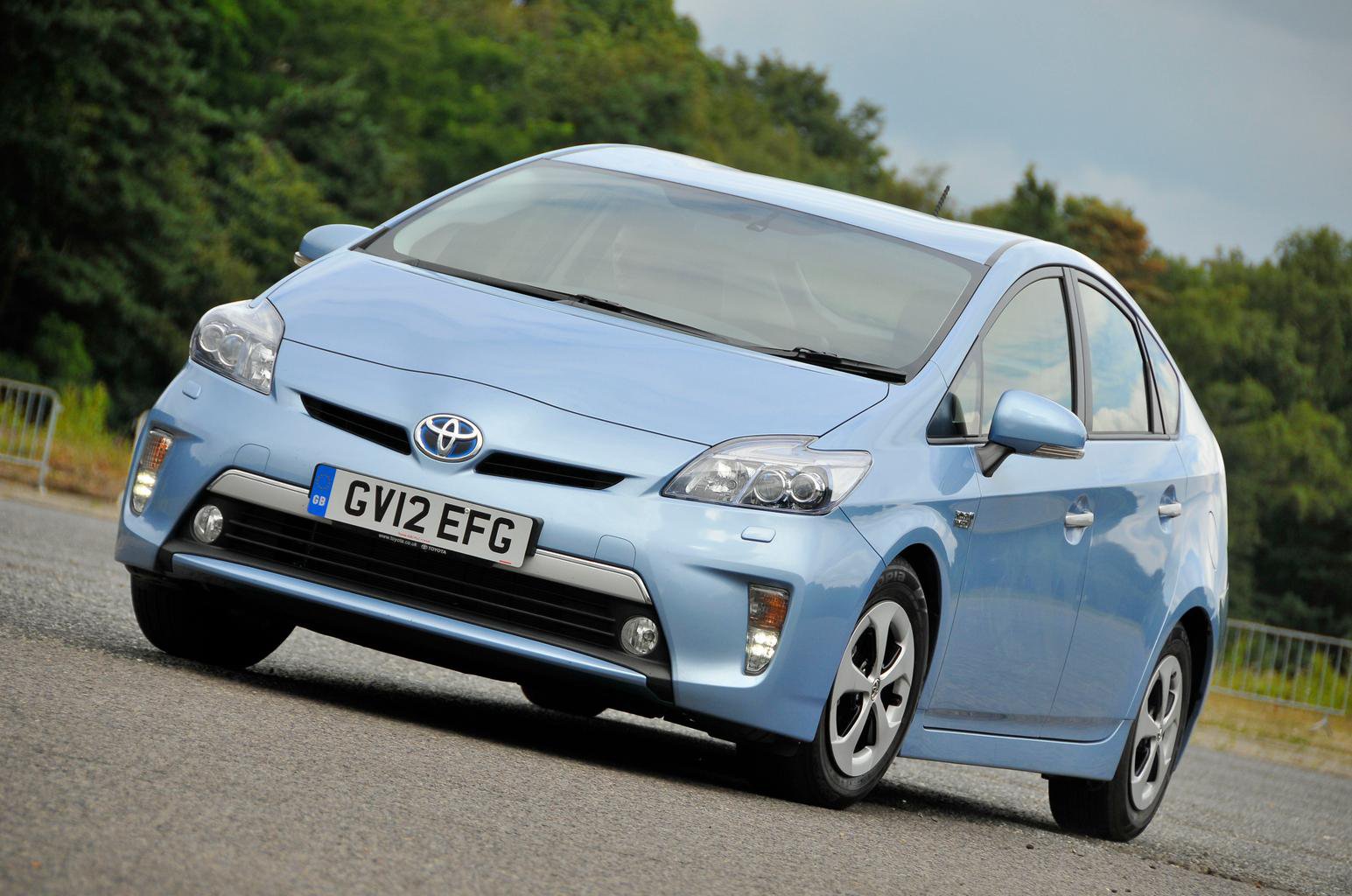 Whichever mode you’re in, the Prius’s firm suspension makes for a crashy ride. The light steering is great for tight, low-speed manoeuvres, but inspires little confidence at higher speeds.

The Volt is just as nippy around town, but its more powerful electric motor comes into its own on faster roads – even short motorway stints can be tackled on pure battery power.

It fires up its petrol engine when the batteries run out of juice, although the engine doesn’t actually drive the wheels, instead charging the battery so that the electric motor can continue to provide power. Even in this ‘range-extending’ mode, it’s remarkably hushed.

The Volt has far more forgiving suspension than the Prius, although poor road surfaces still cause the car to shimmy around a bit. The grabby brakes also take some getting used to, while the low-hanging front bumper scrapes over speed bumps. 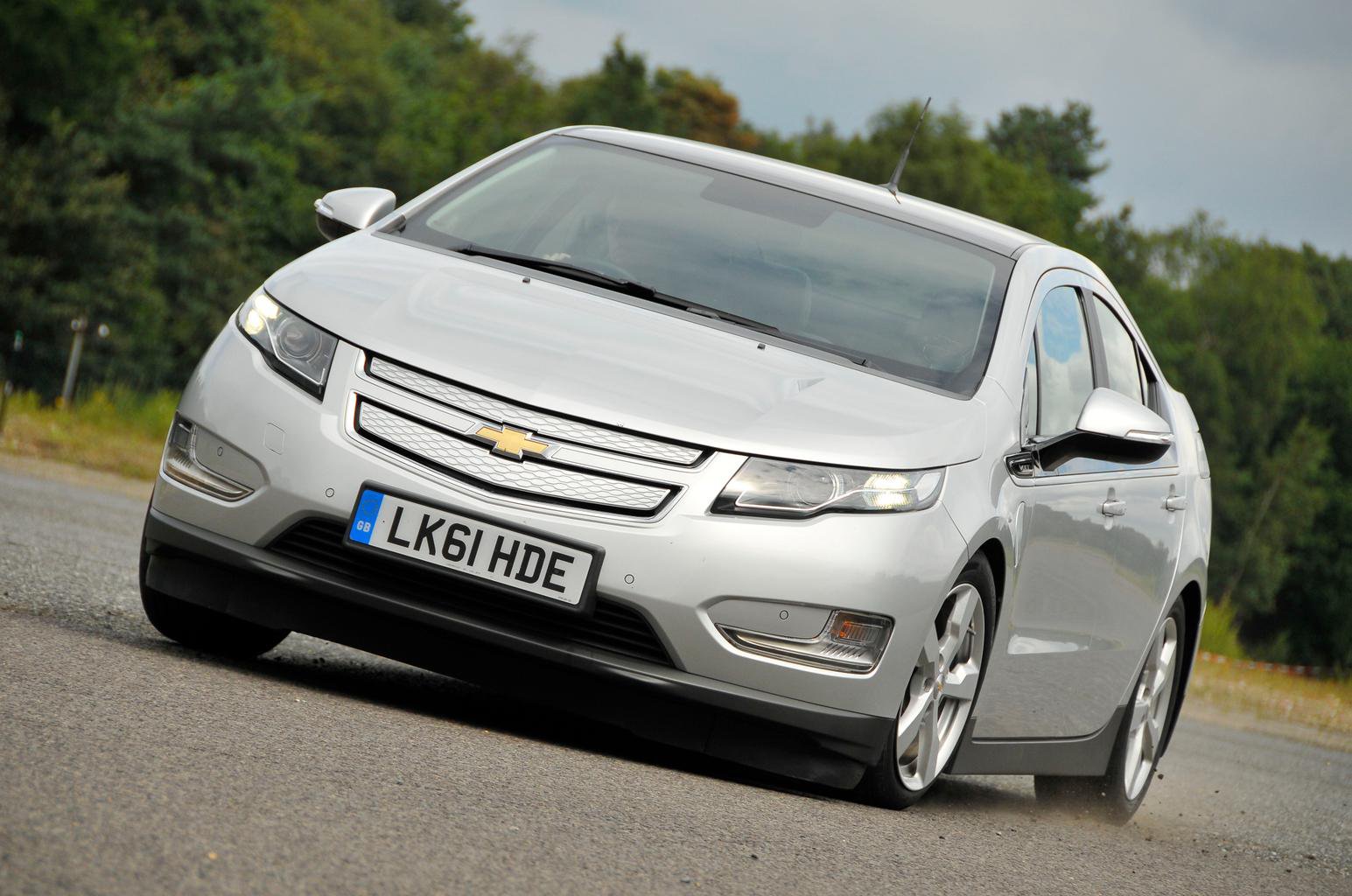