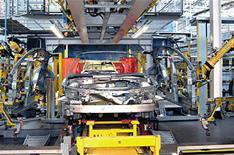 Vauxhall is to shed 350 jobs at its van factory in Luton - but workers at the larger Ellesmere Port plant where the Astra is built are going to escape cuts.

Vauxhall's owner, GM, has launched a consultation process with affected workers at the Luton factory, which currently employs 1500 people. The plant builds the Vauxhall Vivaro, Renault Trafic and Nissan Primastar vans, and has been badly hit by falling business in the economic downturn.

GM is planning to cut more than 9000 jobs across Europe, with the bulk of redundancies in Germany. The company had been planning to sell its European operations to a consortium led by Canadian car-parts supplier Magna, but the deal fell through last month.

The Ellesmere Port factory is set to move to three production shifts in 2011, and the plant is still in the running to produce European versions of GM's forthcoming plug-in electric hybrid, the Vauxhall Ampera.

'One element of the current plan is a proposal to reduce GM Luton's headcount by 354 employees,' said GM in a statement.

'However this number is subject to further consultation. Plant and trade union senior leadership will now work together to develop the details of the plan in order to support the future strategy for GM Luton.'