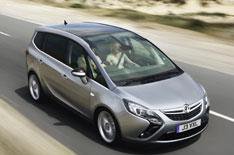 Vauxhall showed off its family of low-emission Ecoflex models at Frankfurt. All have emissions of less than 120g/km, with the lowest (the Corsa) emitting just 94g/km of CO2.

Among the family are five new or revised models destined for the UK, including versions of the Astra GTC and Zafira Tourer.

The biggest improvements are to the Insignia, where the introduction of a stop-start system has dropped the cars emissions by more than 10% to just 115g/km. At the same time, the Meriva Ecoflex now averages 68.9 mpg (up from 62.8mpg), while the Astra Ecoflex is the most economical Astra ever, with CO2 emissions of just 99g/km and average economy of 76.3mpg.

There were also low-emission versions of the new Astra GTC. However, Vauxhall has already said that, while these will be the most economical versions in the initial range, they will introduce Ecoflex versions of the GTC next year, averaging 68.9mpg and emitting 109g/km of CO2.