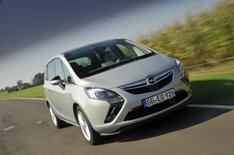 The all-new Zafira Tourer is longer and wider than the current Zafira and shares many parts with the Insignia. Its a more natural rival to larger MPVs such as the Ford S-Max and Peugeot 5008 .

Vauxhall has confirmed that the Zafira Tourer will get a new 1.4 turbocharged petrol engine, a 1.8 petrol with a range of power outputs and a new 2.0 CDTi diesel with three outputs. Vauxhall says certain petrol and diesel engines will come with stop-start systems.

The car will be offered in five trims ES, Exclusiv, SRi, SE and Elite and all versions will come with air-con, DAB radio, cruise control, six airbags, active headrests and a seven-speaker stereo.

The car uses the Flex7 seating system of the current Zafira, which will continue to be sold alongside the new Zafira Tourer.