Peugeot has for many years dipped its toes rather successfully into the small hatchback market, with cars such as the 205 and 306 winning universal praise. It’s also amassed quite a good reputation for producing estate cars, too, rugged and practical loadluggers that ably satisfy the needs of even the most demanding of families.

The 308 hatchback also found favour, despite the great rise of the SUV as the family motor of choice, and it came as no surprise that after the 2013 refresh of the 308 design the firm soon launched an estate version of the car. The 308 SW is longer between the front and rear wheels and has a larger rear end, housing a traditional estate opening and an increased boot area, which offers a better than decent 1660 litres of space with the rear seats folded down.

On top of that, the seats fold at the tug of a lever in a 60/40 split, and the floor is usefully flat with them down thanks to its automatically lowering seat cushions, and as well as that the boot sill is pleasingly low. There’s also a fraction more knee room for rear seat passengers than there is in the hatchback, although it’s still not exactly spacious.

There’s a good range of engines on offer, too. Petrol engines range from an 81bhp 1.2-litre three-cylinder with 108bhp and 128bhp versions of the 1.2-litre turbo triples making up the rest of the petrol range. Diesels include 1.6-litre units of 99bhp and 118bhp, while the range is completed with a pair of 2.0-litre HDis, producing 148bhp and 178bhp respectively.

On the equipment front, there are five trims to choose from, with the entry-level Access models coming as standard with air-con, a DAB radio, Bluetooth and USB connectivity, and cruise control. Active gets you 16in alloy wheels, automatic lights and wipers, rear parking sensors, dual-zone climate zone and Peugeot's 9.7in touchscreen infotainment system complete with sat-nav, while upgrading to Allure adds 17in alloy wheels, front foglights, LED headlights, folding door mirrors and front parking sensors.

The range-topping GT trims add numerous luxuries, with the GT-Line equipping the 308 SW with 18in alloys wheels, privacy glass, LED foglights and a reversing camera, while the GT model gains a beefy bodykit, lowered ride height and keyless entry and start.

On the road, all the engine options make the 308 SW feel sprightly, especially the 1.2-litre three-cylinder petrols in either 109bhp or 129bhp versions, which probably strike the best compromise between performance and economy.

It takes corners pretty well, too, with accurate steering and tidy handling, and it has plenty of grip, should you be going very hard. It rides well, although it can occasionally feel a little lumpy over broken surfaces, and a little fidgety on motorways. That said, the general refinement of this car is pretty good, as is the overall comfort level.

The interior is well designed, with a good driving position, at least for some, and some pleasing materials. Its most striking feature is the small, low-set steering wheel and the instrument binnacle that levitates above it, this layout is more successful here than the same arrangement in some of the other Peugeot models. A 9.7in infotainment touchscreen is standard on most models, which looks good and works well but having some of the major functions, for example the climate control, on the screen can make it a bit fiddly in everyday use.

Overall, though, the 308 SW is a competent and useful car with a likeable quality. Its major problem is merely the strength of its opposition, with admirable cars such as the VW Golf Estate and the Skoda Octavia Estate vying for your attention on the used car forecourts.

Find a used Peugeot 308 SW in the What Car? Classifieds here 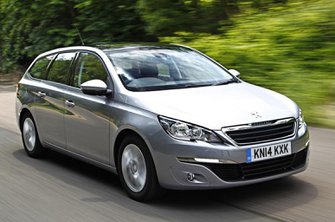