The Rover 45 replaced the Honda Civic-based 400 in 1999, but it was far from an all-new model. The headlights, front grille and bumpers were revised, but much of the bodywork remained the same, although the engines and interior were revamped.

Two models were launched, a four-door saloon and this more practical, family-friendly five-door hatch. The petrol engines have always enjoyed a good reputation for refinement and performance, and the gearboxes are good, too.

Although Rover steadily improved the 45's ride and handling during its six-year life, it's fair to say the car was never at the top of the class. The sense of feel and driver involvement never matched that of the much more enjoyable Ford Focus.

The cabin has a decidedly old-fashioned feel, and the driving position is poor, while any tall adults confined to the rear seats simply won't have enough space. 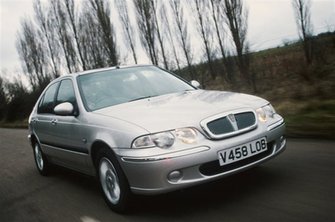