The Saab 9-5 first went on sale in 1997, but its lineage actually stretches back even further than that, to the 1995 Vauxhall Vectra.

Saab was owned by the US car giant General Motors at the time, so it was decreed that the cars should share a common platform. However, while Vauxhall had replaced that platform by 2002, Saab stuck with it until 2010.

As a result, the 9-5 lacks the handling sharpness and precision of major rivals such as the BMW 5 Series and Mercedes E-Class, but it in some other respects it isn't as far off the pace as you might reasonably expect, especially if you go for a post-2002 model.

The 9-5 received a mild exterior facelifted during that year and also gained electronic stability control for the first time in order to improve safety.

Space was always a strong point, as was seat comfort. The 9-5's boot is bigger than those of most contemporary rivals, with plenty of space for large suitcases. 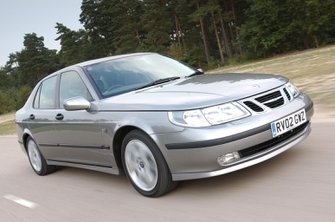