Although the Forester was considered a rival to the likes of the Land Rover Freelander, it isn't really a dedicated off-roader. Instead, think of it as a four-wheel drive estate car on raised suspension.

The overall impression is of a no-nonsense, hard-wearing workhorse. There's none of the funky styling on a Freelander or Honda CR-V, but there is (just) enough space front and rear to take a family, as well as a decent boot.

What's perhaps most impressive is the way the car drives, with a fine blend of ride and handling. It sits a little lower than dedicated off-roaders, so the body is well controlled through the bends.

Despite what we said above, the Forester is actually quite capable off-road, although the limited ground clearance means it won't get into the really deep stuff, like, say, a Freelander. 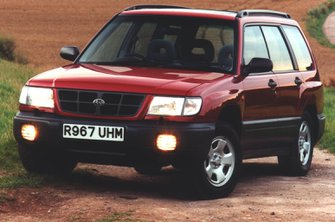