Tough and dependable, if a little rough round the edges: this is the best way to think of the Subaru Forester. It flies in the face of over styled rivals that promise all sorts of off-road credibility by looking tough and bulky, but lack the hardware for them to venture far from the beaten path. Fortunately, the Forester isn’t like that.

For a start there is permanent all-wheel drive; this means that you should be able to go anywhere in your Forester, all year round, especially in petrol versions with a manual gearbox, as they get a low-ratio gearbox. It isn’t available on all models, mind you, which is probably for the best considering that you’ll achieve better fuel economy without it, since you aren’t carrying round a weighty piece of engineering all the time.

On the inside you’ll find plenty of cheap-feeling - no, scratch that (and you probably will), rugged plastics that might be easier to wipe clean, but are nowhere near the same quality as the ones used in the Foresters rivals such as the Toyota RAV4 or Honda CR-V.

The Forester hits back with its handling. Granted, the steering is a bit too light to instil any real confidence, but since the ‘flat’ boxer engine used in the Forester can be mounted low in the car, the Forester’s centre of gravity is lower than most SUVs’. Combined with the all-wheel drive system, this means the car has lots of grip in corners. It isn’t exciting, but it never feels anything less than utterly safe and secure.

The payoff for this is a rather stiff suspension setup that causes the Forester to bounce and jolt on bumps around town. The ride improves as the speed increases, but never smoothes out completely – and at speed, you start to notice the wind noise that comes from the Forester’s boxy profile.

The petrol engines used in the Forester aren’t particularly well endowed with torque and can make the car feel slow. The diesel fixes this, feeling somewhat quicker than its performance figures claim, but it’s rather gruff, especially when allied to the CVT automatic gearbox.

Space inside the Forester is excellent with plenty of head and legroom front and rear. The boot is usefully shaped and has a low loading lip to help make, for example, getting a child’s push chair in or out of it, a relatively easy task. The doors open nice and wide, too, which helps if you need to put a child in their car seat.

The Forester, then, is a flawed beast – but if you are in the market for a genuinely rugged off-roader with a practical interior, it’s worth a look. 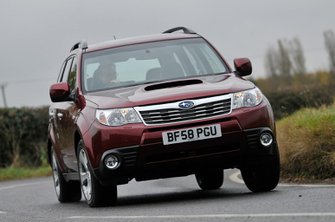