The Corolla has always sold in vast numbers around the world, but has had to endure something of a bland reputation. This model, introduced in 1997 and face-lifted in 2000, was designed to up the tempo a little, but neither version will go down in history as handsome.

The good, but not that good story continues on the road. Although the petrol engines are impressive, the Corolla's drive is not on the pace of the equivalent Ford Focus or VW Golf. The ride feels too hard and the light steering too lifeless for the Corolla to sit in that company.

Similarly, although they're durable and hardwearing, the shiny plastics in the cabin aren't quite up to the mark either.

However boot space is reasonable, and the Corolla's safety features are impressive for a car launched in 1997. With twin airbags as standard it merited a three-star Euro NCAP safety rating at a time when the maximum possible score was four. 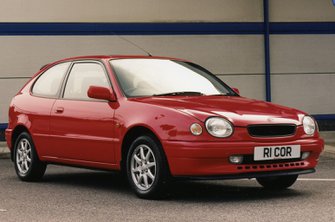