Perhaps the most surprising thing about the Astra is just what a good drive it is, and far better than its styling might suggest. All models have a fine blend of a smooth ride and sharp handling, but one of the drawbacks of going for this saloon model rather than the hatchback is that performance versions such as the SRi simply don't exist.

Similarly, the cabin styling may be uninspiring - the dash is certainly functional rather than fashionable - but what the Astra lacks in aesthetics, it more than makes up for in practicality. True, the cabin looks a little cramped by modern standards (although this saloon has more rear legroom than the hatch), but there's enough space for four adults - and five at a push - as well as a very good boot, with split/fold rear seats on all models. 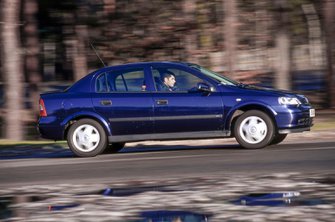