Which used Vauxhall Astra sports should I buy?

The Convertible has a choice of four petrol engines. The 123bhp 1.8-litre has enough power to feel nippy, while the 2.2 with 144bhp has plenty of oomph and is great on twisty roads. The 2.0-litre turbo delivers near-150mph performance, but for those who prefer a slower pace there is a 1.6 with 99bhp. The only auto option was on the 2.2-litre, but it's no more than competent.

The 2.2 is probably the best all-rounder. It has much better performance than the 1.8, but its fuel economy and used prices are very similar.

Whichever you go for, you won't be short of kit. Alloy wheels, air-con, anti-lock brakes, front airbags, electric windows and roof and a CD player are standard on all models.

All but the 1.6 have traction control as standard and the 2.0T and 2.2 add cruise control and a CD multi-changer. Later cars generally have more kit, so they're worth seeking out. 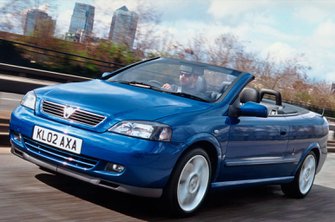