Easy to drive, well made and often well equipped, the Vauxhall Corsa is one of those cars that is omnipresent on the nation's roads because it has something to offer the majority of drivers. It's perhaps not the most exciting of purchases, but it would not be fair to dismiss the Corsa for that reason. It is, after all, very hard to please all people, all of the time.

This generation, which ran from 2014 until 2019, was known as the Corsa E to insiders. It was essentially a complete reskin of the car it replaced, which ran from 2006 to 2014, with heavily revised underpinnings, too.

There was a large choice of engines available, the majority being petrol, but there were a couple of Euro 6-compliant 1.3-litre diesel versions (74 and 94bhp) if you needed better fuel economy. For those who mostly did urban journeys, both the 1.2 and non-turbocharged 1.4 petrols did just fine, but for faster routes, you may have needed to go for one of three turbocharged petrol options: an 89bhp 1.0-litre, a 99bhp 1.4 or a more powerful 113bhp version of the 1.0-litre engine. There was also a lukewarm hot-hatch GSi with a turbocharged 148bhp 1.4 or, if you fancy something hotter, then there's always the 202bhp 1.6-litre engine as fitted to the VXR.

When it comes to trim levels, this Corsa has had many and varied. Life and Sting trims are a bit too basic, and these were dropped in later Corsas. An Active trim was introduced to replace these, right at the bottom of the range. Instead, spend a little more to get a Design model for air-con, the 7.0in infotainment system and Bluetooth. Later cars had an Energy model that sat above Design. SRi models add sports seats in the front and a 60/40 split for the bench in the back.

If you want to get into a really posh Corsa, look at either Excite or SE trims, as you can get heated front seats and a heated windscreen on Excite cars, while SE models come with a heated steering wheel as well – perfect for cold winter mornings. SRi VX-Line and Limited Edition models come with similar equipment to SRi cars, but add a bodykit to the outside of the car and bigger alloy wheels.

The driving experience is where this generation of the Corsa is a let-down. It’s an easy car to drive, and it’s about as quiet as its contemporaries, but it doesn’t steer with the same accuracy as the Ford Fiesta, nor manage to be as capable at long-distance motorway work as the Volkswagen Polo. Of the engine options, in the later cars, the 74bhp 1.4 petrol is plentiful and fine for town, but you should hold out for the turbocharged 99bhp unit. The 148bhp petrol 1.4 engine makes the car brisk but expensive.

Never mind. The Corsa is a rather spacious small car, especially the five-door version, where rear occupants are treated to one of the most capacious back seats in the class. There's much more head room in the Corsa than either the Volkswagen Polo or Ford Fiesta, which helps if you have child seats in the back. To that end, those rear doors do open wide to help you to load children into their seats.

Any drivers with long legs might not be too happy with the amount of leg room available because the front seats don’t go quite far enough back. The driver’s seat might also lack enough back support for some. If you want seat height adjustment, then you will need to avoid Life trim and go for Sting or above. A heated windscreen was available as an option on most Corsa models because of customer feedback from owners of the previous model.

Most of the interior is also made out of classy materials, with only a few brittle pieces of trim undermining the overall feeling of quality. Design trim cars and above get a 7.0in colour touchscreen that can become an extension of your smartphone through the use of Apple CarPlay or Android Auto, thus enabling you to have sat-nav in your Corsa. It isn’t as intuitive as the system in the Skoda Fabia, as the buttons for the volume control can easily be knocked if you rest your hand on the screen. 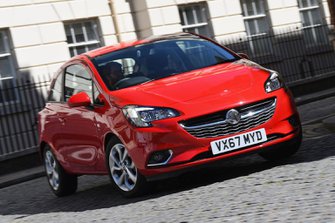