The Vauxhall VX220 is too extreme to be a rival for the Mazda MX-5 or Toyota MR2, so its natural competitor is the car that shares its chassis, the Lotus Elise. Unlike most contemporary Elises, however, the VX comes with anti-lock brakes and a driver's airbag as standard.

It has a choice of two engines - a 145bhp 2.2- or 197bhp 2.0-litre turbocharged unit - and basically you're choosing from fast or very fast. The standard VX's performance is sensational, but the Turbo can take on the very best high-performance cars.

The VX's light weight means there's no turbo lag to worry about, either. Instead, there's just instant power coupled to brilliant handling.

Both versions of the car go round corners superbly, and the driver is rewarded with phenomenal sensitivity through the steering wheel and other controls. There's no power-assisted steering, but the VX doesn't need it, even at parking speeds. The five-speed gearbox used is precise and keeps the engines singing.

What's more of a surprise is that, despite its sporty feel, it also has a supple ride that takes care of comfort. The only word of caution is that getting in and out of a VX is an acquired skill. 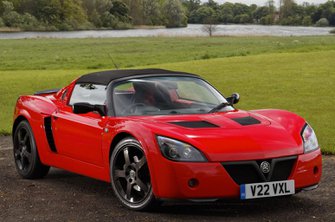