The pert and cute Volkswagen Scirocco made its debut way back in 1974, and was based on the mechanicals of its sibling, the contemporary VW Golf.  Despite not being a speed freak's machine, it was a popular car and it sold well over many years. A more rounded and slightly larger Scirocco appeared in 1982, before disappearing into the ether only a few short years later, and it took until 2008 before the Scirocco name once again graced a sporty VW coupe.

This then all-new car, once again based heavily on the Golf, was released to high acclaim. Distinctive styling, a great chassis and a hint of practicality made it a serious alternative for those considering a hot hatch. A mid-life facelift in 2014 kept it fresh, with subtle changes made to the exterior styling and the use of some improved materials for the inside, which raised the feeling of quality. It also coincided with the launch of two even faster versions, the GTS and the R.

The updated range featured a broad choice of four-cylinder engines, ranging from turbocharged versions of the VW group 1.4-litre petrol, three 2.0-litre petrols and a 2.0-litre TDI diesel offered with 148 or 178bhp.

There were also seven trim levels to choose from - Scirocco, GT, GT Black Edition, R-Line, R-Line Black Edition, GTS and R. Entry-level models get 17in alloy wheels, a roof spoiler, brake discs all round, front electric windows, automatic lights and wipers, and electrically adjustable and heated wing mirrors on the outside as standard, while inside there is air conditioning, a cooled glovebox, and Volkswagen's Composition infotainment system complete with a 6.5in touchscreen display, a DAB radio, Bluetooth and USB connectivity.

Topping the range was the GTS and R models, with the former coming with 18in alloy wheels, a chrome twin exhaust system, a sporty bodykit, sports seats, a golf ball gearknob and numerous GTS badges dotted inside and outside the car, while the latter gets 19in alloys, adaptive sports suspension, xenon headlights, LED day-running-lights, a rear diffuser and an electronic locking differential.

On the road, whatever speed it's doing, the Scirocco is hugely impressive. The 123bhp 1.4 is more about style than speed, as a 0-62mph time of 9.7 secs proves. Given its relatively low asking price and decent economy, it is a sensible choice for someone who wants this car's looks more than performance. The 2.0-litre model records a sub seven second 0-62mph time. This is an outstanding performance and fully competitive with selected rivals, like the BMW 225i coupé. Meanwhile, the R is fast and offers very usable performance. The diesels aren’t especially swift, but they’re not slow either. Due to their immense torque (the flagship diesel offered 258lb ft) they're best seen as GT cars rather than sports models, as you don't have to chase every engine revolution to eke out excellent performance.

The handling of all versions is neutral and there's plenty of grip - remember the Scirocco has a wider track and a lower centre of gravity than the equivalent Golf. Drivers can personalise the ride by changing settings that control the suspension, steering and throttle response, but although it's firm it never threatens to grow uncomfortable.

However, it's not just about dynamics, because the VW was also a stylish car that was well put together using quality materials. The cabin was cleverly thought out and distinctive - so you won't be left feeling as if you're just driving a Golf derivative.

The driving position should suit most people, and there's plenty of forward passenger space. The two rear-seats have limited head room, but there's respectable leg room for this type of car. The boot is just about big enough to be of use, and the two rear seats fold down when extra space is required. 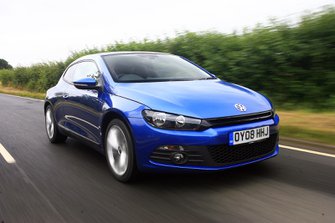