If you're a music fan, you want your tunes to sound as good as possible in your car. We reveal the best car manufacturer audio systems on the market...

Gone are the days when cars came with a universal CD head unit; even the most basic modern cars are now fitted with their own, specific sound systems.

Entry-level in-car audio is much better than it used to be, but top-end systems are particularly impressive, usually the result of car manufacturers pairing up with well-known names in the music business to produce extremely high-quality sound.

We examine some of the best options on the market.

Audi has sold its top-end models with Bang & Olufsen sound systems for years. As well as kicking out superb sound, the speakers look the business; when you switch on the ignition in the highest-spec models, such as the A8 luxury car, the tweeters (smallest speakers) rise out of the dash, which is a particularly cool feature. The flagship 3D Advanced Sound System includes 23 speakers and 3D sound reproduction, too.

The Bowers & Wilkins Diamond Surround Sound System is available in high-end BMWs, including the 7 Series. It pumps out a massive 1400 watts, has 16 speakers and 10 channels for a top-notch audio experience. It’s also possible to specify a more affordable but also impressive Harman Kardon system if you can’t stretch to the Bowers & Wilkins one.

British specialist Meridian is Jaguar Land Rover’s audio brand of choice, and its systems can be found in many of the firm’s luxury saloons and SUVs. They use a special computer, known as Trifield, which blends the sound, while the top-of-the-line versions found in the Range Rover Velar sport up to 12 speakers and pump out 1600 watts. 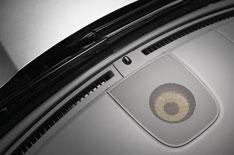 According to audio expert Mark Levinson, no car manufacturer other than Lexus has the right interior acoustics to justify its sound systems, hence the tie-up between the two. A number of the firm’s cars are available with the Premium Audio system, but the number of speakers varies depending on the model. It’s also said to be one of the most efficient car audio systems around, with technology specifically designed to reduce weight, power consumption and heat.

Burmester knows a thing or two about high-end car manufacturer audio, because, along with Porsche, it also supplies systems to Mercedes, Maybach and Bugatti. You can have a Burmester system with any model in the Porsche range, the most impressive of which includes 21 speakers. The manufacturer also has an app to help you tune the system to best suit your musical preferences.

Slick sound systems aren’t just limited to premium manufacturers, because Seat paired up with Beats by Dre – better known for its headphones – to launch Beats versions of the Ibiza small car and the Arona small SUV. These come with eight-channel, 300-watt stereos and include a digital sound processor and a pair of subwoofers, and they’re the most affordable cars in our list.

Volvo has tie-ups with both Harman Kardon and Bowers & Wilkins and offers the respective manufacturers’ sound systems at different price points. The former, a 600-watt Premium system, is available with the XC40 family SUV; the cheaper of the two, it comprises 13 speakers and 7.1-channel surround sound. The latter is known as Sensus Connect with Premium sound and has a full-fat 1400-watt, 18-speaker set-up that creates incredible sound.

Next: Are car service plans worth it? >