The TT uses a 2.0-litre, petrol engine that’s offered in three power outputs, of which our pick is the entry-level 40 TFSI. It produces 194bhp and pulls strongly from low revs, with more than enough mid-range grunt for quick overtakes. 0-62mph takes 6.6 seconds – fast enough to worry smaller hot hatches, such as the Ford Fiesta ST.

The extra power of the 242bhp 45 TFSI is mostly found at the top of the rev range, so it doesn’t feel that much faster than the 40 TFSI in most driving situations. However, while the 40 TFSI is front-wheel drive only, you can add quattro four-wheel drive to the 45 TFSI; it brings extra traction for cleaner launches, even in slippery conditions. The 45 TFSI engine is the only one that's available with a six-speed manual gearbox (the rest use a seven-speed dual-clutch auto as standard), which may add to the appeal if you're an old-school driving enthusiast.

The 302bhp TTS is quick enough to pip the Porsche Cayman from 0-62mph (4.5sec), and, with four-wheel-drive traction as standard, none of its power is squandered; you simply point the car in the direction you want to go and give it as much gas as you see fit. Stick it in Dynamic mode and the throttle response sharpens up, the S tronic automatic gearbox holds on to gears for longer and the exhaust even adds a satisfying – but manufactured – burble to the soundtrack on your back-road blast.

The TTS itself plays second fiddle to the TT RS, which we've reviewed separately. It’s the one you'll want if you're really after the ultimate in TT performance , thanks to its 395bhp, five-cylinder engine.

Sport models have a suspension setup that delivers a firm but generally comfortable ride, and even the optional sports suspension (standard on S Line, Black Edition and Vorsprung trims) isn't too bumpy.

Both suspensions can be a little jarring over motorway expansion joints or particularly intrusive drain covers, but this is a sporty coupe, not a luxury limo, after all. Add big wheels (up to 20in are available), though, and you’ll feel every imperfection in the road, so it’s worth resisting the temptation to do so if you value comfort over sporty looks.

The TTS comes with adaptive suspension (Magnetic Ride in Audi speak) as standard; this allows you to stiffen or soften the ride to taste. It’s an effective system and, in Comfort mode, the TTS's ride is surprisingly agreeable. 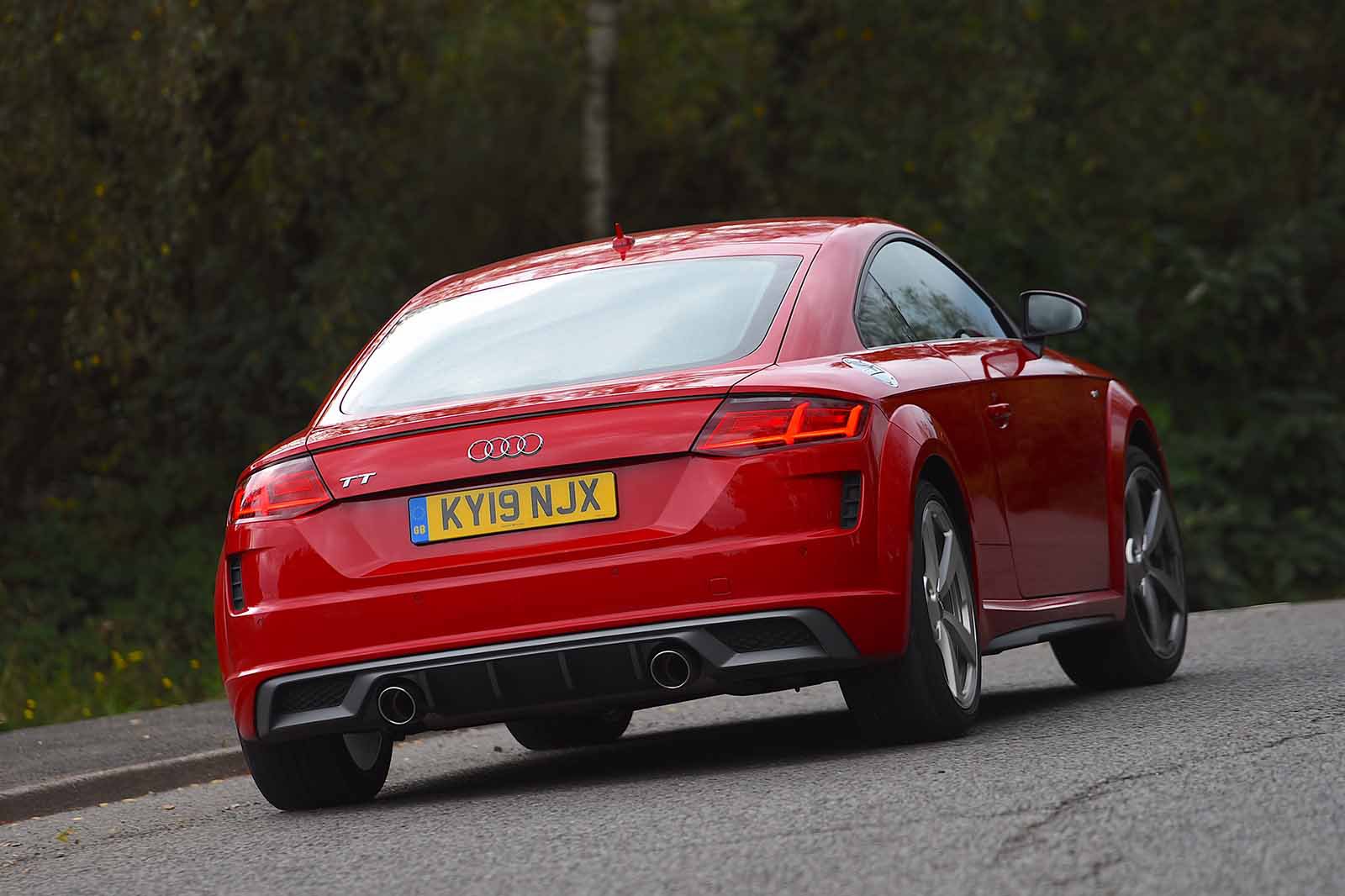 Turn in to a corner and the TT’s light, accurate steering allows you to place it on the road with pinpoint accuracy. Grip levels are good and there’s hardly any body lean – especially in versions equipped with the stiffer sports suspension.

In wet conditions, front-wheel-drive TTs can struggle to transfer all of their power to the road when accelerating out of corners. The four-wheel-drive (quattro) versions, on the other hand, are virtually unflappable.

Put simply, the TT is more capable and more fun than its closest rivals, the BMW 2 Series or Ford Mustang, albeit not as playful and thrilling as proper sports cars, such as the Porsche Cayman and Alpine A110.

The Audi TT is a sports coupe, so it was never likely to be as hushed as a luxury limo. However, while there’s noticeable wind noise around the frameless windows, and some road noise, it's still a pretty quiet car to cover big miles in – certainly when compared with rivals such as the Ford Mustang.

As we've mentioned, the six-speed manual gearbox is available only with the 45 TFSI engine. It has a slightly long and un-sporty shift action, but it’s light and precise. The seven-speed S tronic automatic gearbox is also available for the 45 TFSI, but is standard on 40 TFSI and TTS. It's generally slick, apart from being a little jerky at slow speeds – more so when the car’s switched to its more aggressive Dynamic mode.