The first generation BMW X5 opened up a new segment, that of the upmarket ‘soft-roader’, with all the trappings of an executive car wrapped up in a rugged-looking package. Primarily designed to be driven on-road it paved the way for a myriad of competitors and by the time the second-generation X5 arrived in 2007 it was up against some stiff opposition.

Just about the only criticism of the original X5 was that lacked space in the interior and boot, thus these points were addressed for its replacement. It even gained the option of having seven seats, although the rearmost were strictly for children. Overall, an Audi Q7 has slightly more luggage capacity, but in terms of passenger accommodation there’s not much to choose between the two cars.

Despite being a 4x4, the X5 has all the traditional attributes you associate with BMW – strong engines, good performance and excellent handling. It’s a cliché, but an X5 really can be hustled along like a sports car on stilts.

The trade off is a hard ride, especially with the optional larger wheels, but it’s smooth enough on the motorway, without too much wind or road noise. As with any large 4x4, running costs can be high, but opting for a face-lifted model (2010-on) will bring lower emissions and improved economy. 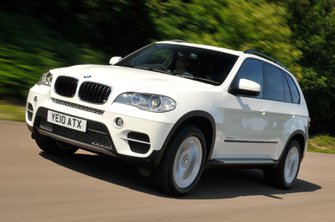