When the original seven-seat Audi Q7 was introduced in 2006, it immediately became a popular choice for those looking for a luxury SUV with a premium badge. However, this second-generation Q7 is a far better SUV, that's nicer to drive, more comfortable and noticeably more spacious. What's more, used examples are a damn sight more affordable, with prices beginning around £23,000.

The Q7 offers several engine options, mostly powered by diesel. The most common is the 3.0-litre TDI diesel in 218bhp and 272bhp forms. There’s also a plug-in hybrid e-tron version with 34 miles of electric range. All of these models feel slow in comparison to the mighty SQ7, however, with its 429bhp 4.0-litre V8 diesel engine. Later models from 2019 onwards featured the same 3.0-litre diesel with 228bhp and 282bhp, now known as the 45 TDI and the 50 TDI, plus a 335bhp 55 TFSI petrol version or a 376bhp 55 TFSI e plug-in hybrid. The SQ7 continued on with the same power output.

There are two trim levels on the earlier cars, SE and S line. Both are handsomely equipped. SE comes with sat-nav, Bluetooth, dual-zone climate control and xenon headlights, while S line brings more aggressive styling and larger 20in alloy wheels. The e-tron and SQ7 come in their own bespoke trim levels. Post-facelift 2019 onwards models became Sport and S line that both get LED matrix headlights as standard as well as air suspension. Black Edition models have four-zone climate and 21in alloys, while Vorsprung has every option thrown at it.

The standard suspension is a touch firm around town, but at high speed the ride only jars if you hit a particularly sharp bump. We'd still recommend you seek out a car equipped with the optional air suspension, though, because this transforms the Q7 into not only the best-riding car in its class but one of the best in any class or budget. Post-facelift cars come with the air suspension as standard, and all of them ride brilliantly. Black Edition and Vorsprung trims get a sportier air suspension set-up, and it shouldn't come as a surprise that this doesn't smother bumps quite as well.

All engines offer plenty of oomph, and the e-tron and 55 TFSI e, despite each car's eco-focus and the additional weight of their batteries, feel even quicker when their batteries are fully charged, thanks to the instant torque the electric motors provide. The SQ7 is particularly rapid – although we’d argue that its sheer power is a bit excessive for family duties.

All Q7s come as standard with four-wheel drive, so there’s plenty of traction. Regular versions allow a little bit more body lean through corners, but they're still far more agile and better tied down than a Land Rover Discovery. The SQ7 has a trick anti-roll system that makes it handle like a hot hatch – albeit one that weighs two tonnes. The additional weight of the batteries in the e-tron can make it feel a bit ponderous and unwieldy, though.

There's a healthy dose of luxury to the interior, making it a really refined place to spend time, and, since it's an Audi, it's supremely well made. The Q7’s dashboard and interior at large is a smorgasbord of soft-touch materials and well-damped switches; any harder plastics are restricted to less noticeable locations. Real metal (or wood, if you prefer) inlays only add to the wonderfully classy ambience.

There's a brilliant infotainment system, at least on the earlier cars – the MMI infotainment is second only to BMW’s iDrive for ease of use, so pairing phones or programming the sat-nav is a doddle. With this system, a high-definition 8.3in screen rises from the top of the dashboard and is controlled using buttons and a simple rotary controller on the centre console. There's also a touchpad that allows you to handwrite instructions; this is handy when programming an address into the sat-nav. However, post-facelift models switched to a fiddlier touchscreen arrangement, which is still good, but not as easy to control as the earlier system.

You'll enjoy an excellent driving position with a commanding view over the long bonnet. Even those well over six feet tall will find the Q7 roomy in the front; head room is very generous, the seat slides back a long way to deliver lots of leg room and there’s loads of elbow room.

Getting in and out of the second-row seats is easy, thanks to large door apertures and slim sills. The Q7 offers a few centimetres more leg room than the BMW X5 and  Land Rover Discovery and virtually matches that of the Volvo XC90. Really tall adults will only want to sit in the two rearmost seats for short trips, but anyone under six feet tall won’t feel too cramped. They’re certainly roomier than the third-row seats in the BMW X5 and Mercedes GLE. A Discovery is a better bet if you regularly need to carry seven adults, but at least the Q7 has more cargo space behind the third-row when the seats are up.

If you're interested in finding a used Q7, or any of the other SUVs mentioned here, head over to the Used Car Buying pages to find lots of cars listed for sale at a great price. 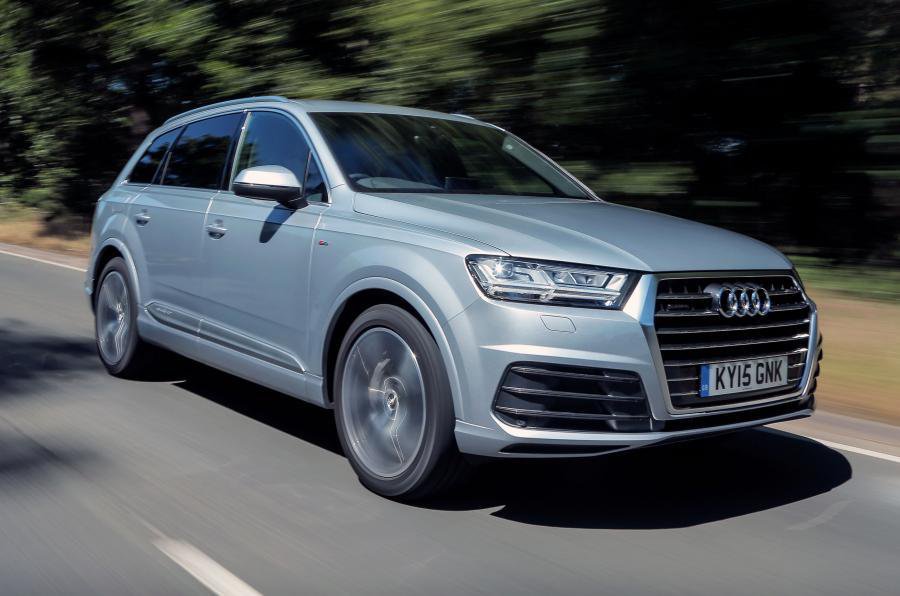