By the time the third iteration of the BMW X5 arrived in 2013, the German company’s largest SUV was well established as one of the best in class. That’s no mean feat when you consider its rivals include the Porsche Cayenne, Audi Q7 and Range Rover Sport.

This generation of X5 was one of BMW’s largest and most expensive models, so it carried certain expectations of luxury and performance - certainly more so than the ability to do serious off-roading. It’s therefore no surprise that if you want an SUV there are better options if you want to tackle the rough stuff. Indeed, there was a version of the X5 that didn't even come with four-wheel drive (badged sDrive, rather than xDrive).

For an SUV that excels in daily use, however, the X5 is a formidable machine. Part of this is because it's one of the more saloon-like SUVs to drive. By that we man it turns in to corners well, doesn’t lean excessively and finds plenty of grip. Ride comfort is also good, particularly if you find a model with the upgraded adaptive comfort set-up.

The engine range starts with a 215bhp 2.0-litre diesel in the 25d. That might sound like a stretch in such a large car, but, aside from being a little noisy, it actually performs very well, helped by using the same eight-speed automatic gearbox as pricier models.

Another standout feature of the X5 is the size of its interior. Two tall adults can travel in the rear without any cause for complaint, and although shoulder room is a little tight for three people sitting abreast, the flat floor does at least mean they won’t be squabbling for foot space.

The boot is massive, plus it has no loading lip and no wheel arch intrusions. On all models bar the X5 M and xDrive40e, buyers could also specify a third row of seats, with the extra two chairs folding out of the boot floor. Although only really suitable for children, they add another string to the X5’s bow.

In 2018 this third-generation X5 was finally replaced by an all-new and updated model, in an effort to take the crown back from such luxury SUV heavyweights as the Audi Q7 and the Range Rover Sport. This new fourth-generation X5 calls on its traditional virtues as key to its undoubted success – namely a suitably upmarket interior and the same tight handling that made this version so promising, not to mention air suspension as standard, which promises an even smoother and more comfortable ride. 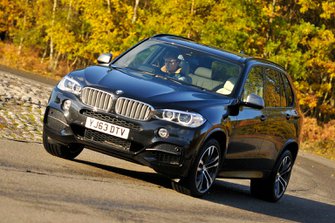