Once upon a time, the Ford Ka was a very small car, offered in its first generation as a diminutive three-door hatchback whose spirited handling soon captured the public imagination, and in its second generation as a slightly uninspiring city car based on the hugely popular Fiat 500.

Now, though, it’s known as the Ka+ and it’s a rather dumpy five-door hatchback that sits just below the Ford Fiesta in terms of size. It’s actually based on a small Ford hatchback that is made and sold only in India, albeit highly tweaked to suit European roads and needs, and as such it prioritises practicality and value for money above cheeky looks and engaging driving pleasure.

Engine choices are limited to just three options. Early cars come with a 1.2-litre four-cylinder petrol engine with either 69bhp or 84bhp, while facelifted examples have a revised 1.2-litre three-cylinder petrol engine (again in 69bhp or 84bhp forms) or a 94bhp 1.5-litre diesel. However, no engine is particularly brilliant out on the open road. All petrol versions are a little disappointing because they're unrefined and can feel laboured. Either version will need revving hard to get the best from it and doesn’t sound pleasant when you do. To make matters worse, the Ka+ is equipped only with a five-speed gearbox.

Trim levels are limited to the ultra-cheap Studio or better-equipped Zetec, which comes with desirable features such as alloy wheels, air-con and an infotainment system. In 2018, the Ka+ Active was unveiled that provided a raised ride height and other off-roader-inspired trinkets to make it look tougher, but the suspension changes ruin the ride and make it wallow in the bends, so is worth avoiding.

On the flip side, standard cars ride extremely well and deal with bigger bumps better than many larger cars. It steers nicely, too, and pushed hard it corners neatly, just like the first-generation Ka. If you can ignore the engine, this is a fine driver’s car.

There’s more good news inside, where there’s plenty of space for a six-footer to sit behind a six-footer, and the boot’s a reasonable size for this class, with 60/40 folding rear seats as standard. All the controls are logically placed and easy to locate, and feel pleasant enough to use. However, some of the materials used are a little low-rent and there are plenty of hard, scratchy plastics on view.

So, overall, the Ka+ has a lot going for it. It is, in truth, a much better car than the older Ka models and should prove a cheap car to run. In addition, prices on the used car market are now beginning to fall to levels that many would find quite attractive. 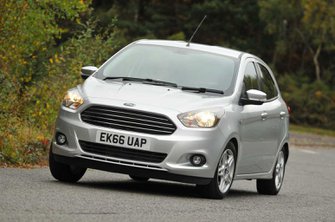