Go for entry-level Zetec Edition trim and you'll have to manually adjust the driver's seat, but more expensive trim-levels give you 10-way electrically adjustable front seats as standard (ST-Line trim omits this on the passenger seat, though). Whichever model you choose, though, the Mondeo's seats are comfortable over long distances and reasonably supportive. The sport seats of the ST-Line models hold you in place a little more securely through corners, thanks to their more pronounced bolstering.

When it comes to dashboard layout and clarity, there's little to complain about, although the Mondeo's air conditioning controls could be a bit more user-friendly; adjusting the interior temperature involves stabbing away at buttons, rather than simply twisting a dial like you do in rivals such as the Skoda Superb.

This isn’t a Mondeo strong point. The raked-back chunky front pillars can partially obscure your view at junctions, while the sloping roofline and wide rear pillars cause big blindspots over your shoulder. Also, because it’s such a big car with fairly swoopy lines, it can be hard to judge the Mondeo’s extremities in tight parking spots. Having said that, many rivals suffer from similarly mediocre visibility, including the Mazda 6, although the Skoda Superb’s is substantially better.

Helpfully, all trim levels have with front and rear parking sensors as standard to provide assistance while manoeuvring, while a rear-view camera is a reasonably priced option. A heated windscreen is standard on all trims, clearing the screen of ice and condensation much faster than would be the case if you used the air conditioning system alone. 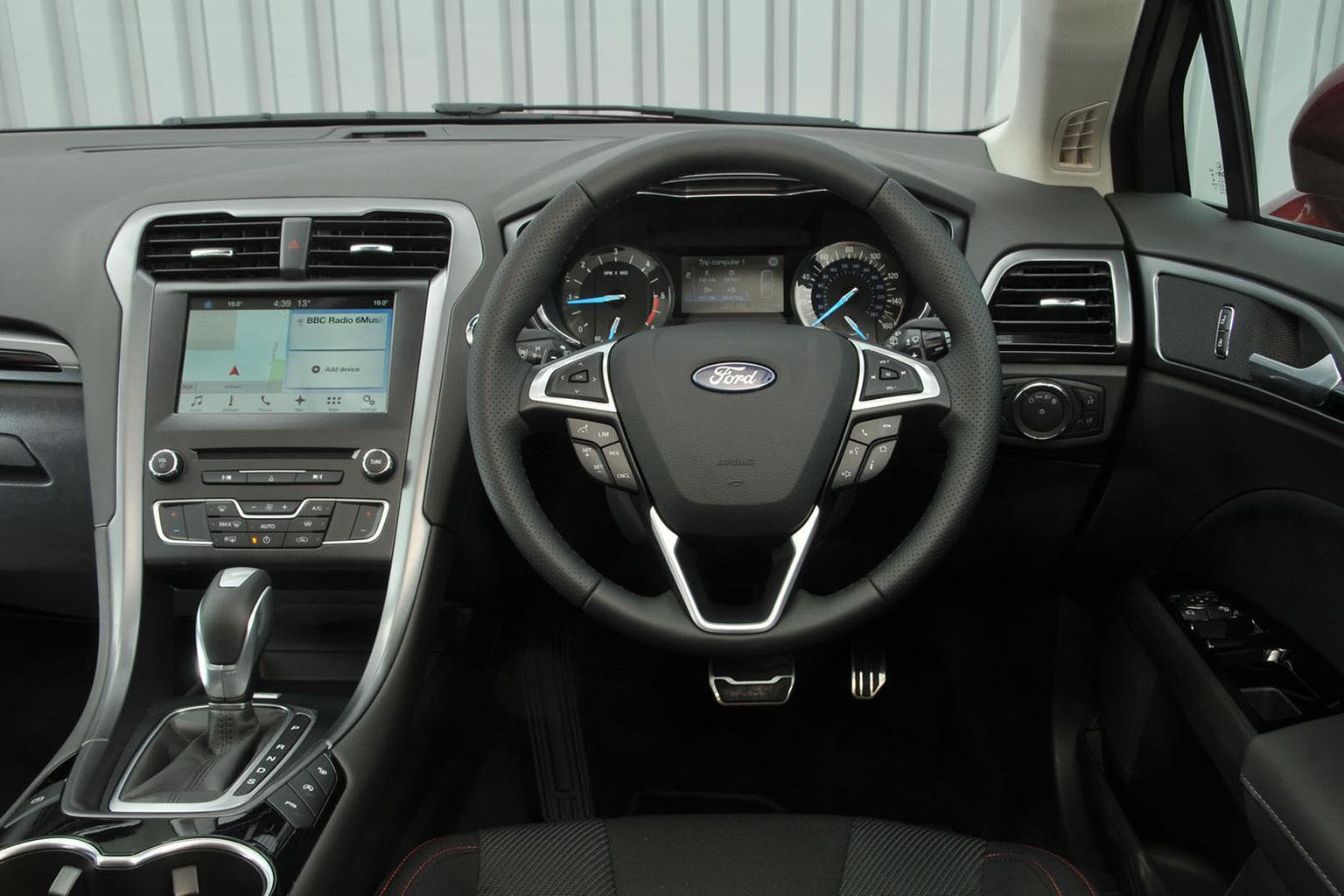 When it comes to infotainment gadgetry, the Mondeo stacks up pretty well on paper. Even entry-level Zetec Edition trim gives you an 8.0in colour touchscreen with sat-nav, a DAB radio and Apple CarPlay and Android Auto smartphone mirroring.

That last feature certainly comes in handy, though, because Ford’s own interface is incredibly basic and slow to use. The graphics aren't especially sharp and the touchscreen isn't particularly user-friendly, either, compared with the touchscreens in some rivals, including the Skoda Superb, or setups that use a physical rotary controller, such as the Audi A4’s MMI system.

A punchier 12-speaker Sony sound system is standard on range-topping Vignale models and can be added to some of the cheaper trims, but the difference it makes isn't huge, so we'd save the money.

Again, not a Mondeo strong point. In fact, compared with most executive rivals, even in this price bracket, the Mondeo's interior feels rather low-rent. There's lots of hard, matt grey plastic on the centre of the dashboard, for example, and the buttons on the steering wheel also feel quite cheap.

Moving up to ST-Line and range-topping Vignale add leather seats and a wider variety of high-quality finishes, but the Mondeo still lags well behind the Superb or Volkswagen Passat, let alone premium-badged executive rivals such as the A4.