There are times when only a convertible car will do, and days when it has to something loud, brash and preferably American. Enter, stage left, the Ford Mustang Convertible.

This sixth-generation Ford Mustang Convertible promised to be the most UK-ready pony to trot out of the vast Ford factory since the car first rolled off the production line in 1964. You see it was engineered from the outset with right-hand drive, but to look at and to drive this is still in every detail the all-American, wind-in-the-hair muscle car we’ve come to know and even, occasionally, love.

Its scale is still unmistakenly American, though. You can have it with a 2.3-litre turbocharged four-cylinder petrol engine or a 5.0-litre V8 one. You can have it in its standard form, which includes keyless entry and start, a selectable drive mode switch, LED headlights,19in alloy wheels, adaptive cruise control, dual-zone climate control, a rear parking camera and a limited-slip differential, or with a variety of Custom option packs which include an upgraded B and O audio systems, climate-controlled seats and a sat-nav.

On the road, the Mustang Convertible is brawny and butch and feels the heavy-ish car it is. Its steering requires more heft than most similar performance cars do these days, so if it doesn’t turn in to corners as quickly as the best rivals it still grips well and can be provoked into some interesting angles if wanted. The V8 car is fast, after an initial pause when you move off, while the lighter four-cylinder version has a respectable turn of speed without ever feeling terribly exciting.  The optional 10-speed automatic 'box is rather snappy and can flick through multiple gears in one go. An occasional habit of switching between ratios indecisively is the only slight annoyance.

The driving position is all-American cool, and for the most part hard to fault. It has a huge range of adjustment to the steering wheel and seat, meaning even the tallest of drivers should have no problem getting comfortable. That said, some might wish the seat could be a little lower.

The 12.0in digital instrument cluster is impressive, although the graphics on the standard 8.0in touchscreen look a little old-fashioned. They respond with reasonable speed, though.

There’s plenty of room up front, although space in the rear is a little limited for such a large car. There’s a good-sized boot, too, although the high loading lip and narrow opening limit its usefulness. 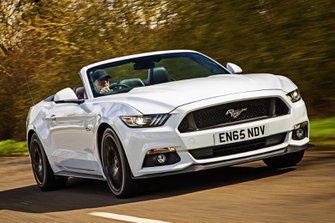