Inaccurate and slightly silly names are strewn throughout the world of cars. But in the case of the Kia Soul, the badge it wears on its rump isn’t quite as daft as it might at first sound.

For starters, its funky looks and gaudy paint jobs add personality, and are reminiscent of its most fashionable small SUV rivals – the Nissan Juke and Mini Countryman.

Yet the Soul is more than just a pretty face. Unlike the most style-conscious small SUVs, it’s actually remarkably practical. There’s loads of room in both front and back seats, for example, while the boot is a very useful square shape, even if it isn’t ultimately much larger than average for the class. It’s also worth noting that when you fold the seats forward, they leave a step, so you don’t get the same flat floor you do in some SUVs.

The dashboard looks unusual, too, with its stereo-inspired design cues, and while some of the plastics are rather low-rent, there’s decent visibility, and all the buttons and switches are close to hand.

Out on the road, the Soul isn’t the most sophisticated thing going, mind you, and nor is it the most fun. The ride is rather jittery on all but the smoothest roads, and while the body doesn’t lean over too much in fast cornering, vague steering means the Soul isn’t as involving as it could be.

There’s a choice of two engines: a 1.6-litre petrol and a diesel of the same size. Both can become rather noisy when they’re being pushed hard, and in the petrol version, you’ll have to do so regularly as it feels rather lethargic otherwise. The diesel provides more low-down shove, but the trade-off is that you have to put up with a bit of vibration through the steering wheel and pedals. 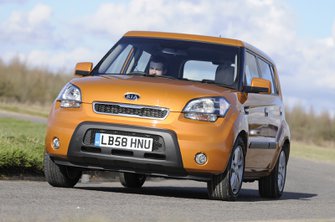