Nominative determinism. That’s the proper name for those occasions when someone’s name has an impact on what they do or who they are. Like BBC weather presenter Sara Blizzard, her American counterpart Storm Field, or lawyer Sue Yoo. Then there’s the Kia Soul, a car that was clearly named with this phenomenon in mind, in an attempt to imbue it with sufficient character to elevate it above the throng of small SUVs flooding the used market.

Did it work? Well, first impressions of the Soul weren't bad: it had chunky, fashionable styling that avoided resorting to retro cues yet it still managed to stand out from the crowd. This second-generation version stayed on sale from 2014 until 2019, and attracted many happy owners. It was replaced by a new version of the car in that year, but this was only available in EV form, in other words as a pure electric vehicle.

Three engines were available originally: two petrols, with 130bhp and 201bhp, and a 134bhp diesel, all of 1.6 litres. There was also the Soul EV which, as mentioned, was an electric car.

The trim levels handily started with 1, which got air conditioning, a DAB radio, Bluetooth and front and rear electric windows as standard, then proceeded up through 2, with its climate control, sat-nav, cruise control and rear-view camera, and then 3, which gets leather seats – heated in the front – larger alloy wheels and front and rear parking sensors.

Top-of-the-range Sport got the more potent petrol engine as standard, along with sporty styling, a panoramic glass roof, heated rear seats and an upgraded sound system. In addition, a series of special edition models were made available throughout the Soul’s life, with various paint or equipment options thrown in for free.

While those top models might sound tempting, we reckon the 1 or 2 makes the most sense, because they came with smaller wheels that make the Soul ride acceptably well – with bigger wheels, it becomes too jarring over bumpier roads. Mind you, no matter which Soul you choose, the slightly firm suspension does at least mean body lean is kept under control in corners.

Don’t go thinking it was a sporty car, though; the Soul had very light and remote-feeling steering that, while useful at parking speeds, made it feel vague and uncommunicative at speed. Meanwhile, the lower-powered petrol engine, while reasonably quiet, was extremely lethargic, and the more powerful version was fast but thirsty. The diesel represented a good balance between punch and fuel economy, but it was noisy and vibrated too much.

The Soul EV was far quieter, as you'd expect, and had plenty of low-down grunt, but the extra weight of its batteries made it even more ponderous than the standard Soul to drive.

Where the Soul did win friends is inside. It had a tasteful dashboard finished in smart plastics that was far more appealing to use than those of rivals such as the Nissan Juke and Renault Captur. And on 2 models and above, there was a fast, well-designed touchscreen infotainment system that’s one of the easiest out there to use.

There’s loads of room for both front and rear passengers thanks to the Soul's tall, boxy roofline, although boot space is only average for the class – there’s more in the Suzuki Vitara, for example. What’s more, you don’t get sliding or reclining rear seats – they only fold in a 60/40 split, making the Soul a little less versatile than its best rivals. 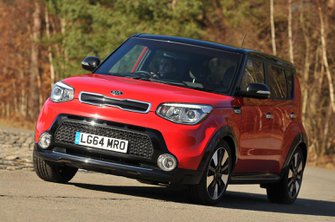