There are three engines to pick from: 119bhp and 148bhp 2.0-litre petrols or a 113bhp 1.8-litre diesel. The entry-level petrol and the diesel come with front-wheel drive, the 148bhp petrol is only available with four-wheel drive.

Our favourite is the least powerful petrol, which actually delivers impressive performance on paper – 0-62mph takes a respectable 9.0 seconds. However, you’ll only see that kind of pace if you’re willing to be fairly brutal with the accelerator. This engine isn’t turbocharged, you see, and is about as accelerative as a somnolent slug if revs drop below 2500rpm, specially in higher gears. Despite having half the engine capacity, the turbocharged Arona 1.0 TSI 115 has more low-end surge. Don’t be too deterred, though, because there’s reasonable pick-up for staying with the flow of motorway traffic if you make good use of the gears to keep the engine revs fairly high.

We’re yet to try the 148bhp engine in this facelifted CX-3, but it’s essentially the same as it was in the previous iteration. It has more power than the 119bhp petrol but produces identical torque at similarly peaky revs, and weighed down by a heavy four wheel-drive system, it isn’t much faster in the real world. So, unless you really need four-wheel drive, we wouldn’t bother.

If you’re interested in easily accessible performance, choose the diesel. It’s slower than the petrols from 0-62mph (9.9sec) but delivers its oomph much lower down – from around 1500rpm – and this helps it feel faster in everyday driving as a result. It revs keenly for a diesel, too. The only snag is that you can only have in top-spec Sport Nav+ trim, which makes it a rather pricey choice.

Despite being firmer-riding than some of its rivals, such as the C3 Aircross, the CX-3 feels better tied down and more composed over prominently undulating roads. It also manages to take the sting out of sharper intrusions such as potholes and expansion joints, without crashing and bashing too much.

That said, the Captur is still a little more supple around town road, and the Arona is a slightly better-riding car across country.

SE Nav+ and SE-L Nav+ models come with 16in alloys that offer the best ride, while Sport Nav+ trim gets larger 18in wheels whose low-profile tyres do little to cushion the bumps. 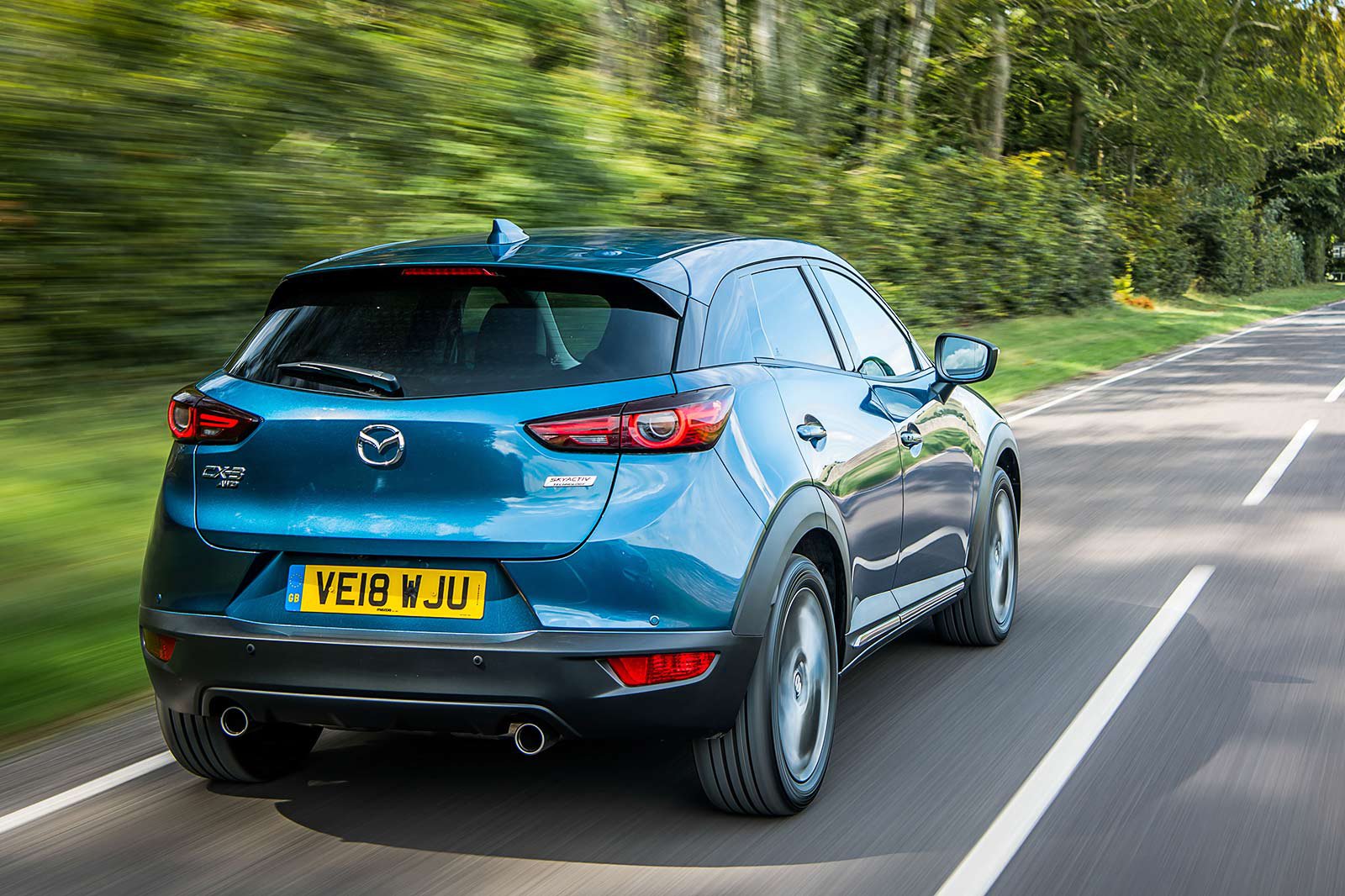 There are two distinct sides to the CX-3’s handling. Around town, its light steering demands little effort, although the limited steering lock can make negotiating tight multi-storey car parks a bit of an ordeal.

On the other hand, on open roads, minimal body roll and the tight composure brought about by that slightly firm suspension combine to give the car a slightly sporting edge – certainly compared to the C3 Aircross and Captur.

It’s a pity, though, that the steering is less ingratiating at higher speeds. It’s too ‘sticky’ around the straight-ahead, failing to return to centre as definitely as we’d like, and never builds enough weight or feel through corners. So, for an entertaining small SUV we’d look instead at the Arona or Kia Stonic.

The petrol engines are loud and not as smooth as some competitors, partly because they need to be revved so hard. Rivals like the Arona 1.0 and 1.5 TSI and Captur 0.9 TCe spring to mind as quieter prospects. The diesel is louder still and sends a few vibrations through the gearlever and steering wheel, but isn’t particularly rough-sounding for a diesel and there are worse offerings in the class.

Sadly, even putting its engines aside, the CX-3 isn’t that quiet at high speed. There’s a noticeable flutter of wind noise from its door mirrors at 70mph and a fair bit of road and suspension noise – enough to get annoying on coarse or broken Tarmac. The Captur is less tiresome on a long journey as a result.

On the plus side, the CX-3's controls are slick and well weighted, which works to aid a smooth driving style. For example, the manual gearshift is precise and doesn’t require much effort, the automatic gearbox is slick and the brakes are progressive.