It might surprise many to discover that this is the third generation of the Mercedes B-Class, a mid-size MPV that has often been overlooked in the German firm’s extensive range.

The first was a bit plain-jane, and was perhaps no more than an enlarged version of the old A-Class; the second then shifted emphasis slightly to become a more straightforward MPV, with an improved exterior design and more versatility, and here’s the third, which at first glance seems to continue and expand on the themes of the second.

Two trim levels are offered – Sport and AMG Line – with the list of standard equipment including climate control, LED headlights, cruise control, faux-leather seats and 17in alloys. AMG Line trim adds mainly styling fripperies, with the real goodies being added in a number of optional packs. There’s an Executive pack, which brings front and rear parking sensors, heated front seats, power-folding door mirrors and a large 10.3in touchscreen. The Premium pack is also worth looking out for. This adds keyless entry, ambient interior lighting, larger 10.3in digital instrument dials and an upgraded sound system.

On the road, the entry-level 1.3-litre petrol (badged B180) has performance that’s adequate rather than scintillating, but even with bums on all five seats and a bootful of baggage, there’s enough oomph to get up hills without thrashing the engine. That’s a good thing because, when you do rev the engine harder, it doesn’t sound particularly pleasant. The B200 adds more oomph, the B220 adds even more so and the B250 is a real flyer.

The 180d gets along well enough, although it can be noisy at high revs. Of the 2.0-litre diesels (badged B200d and B220d), both are genuinely impressive. Even the B200d produces its maximum pulling power low down in the rev range, so it feels punchy enough around town and, unlike some diesels, delivers its power progressively rather than in one big rush when the turbocharger kicks in. The B220d ultimately feels quite a bit nippier and is capable of accelerating from 0-62mph in a hot hatch-baiting 7.2sec.

Later versions dropped the B220 and added a B250e plug-in hybrid model to the range. It has a 1.3-litre petrol engine but one that’s augmented by an electric motor that provides a healthy slug of extra pulling power. It’s very nearly as quick as the regular B250, but also offers an official all-electric range of up to 44 miles.

The dashboard is modern and stylish and fairly intuitive to use, too. It also uses Mercedes’ MBUX (Mercedes-Benz User Experience) touchscreen infotainment system. As standard, this incorporates two 7.0in screens: one for features such as the sat-nav and radio, the other replacing the traditional analogue instrument binnacle.

The B-Class has one of the largest boots in the class. Indeed, you’ll fit more in it than you would a BMW 2 Series Active Tourer or VW Golf SV, and it benefits from a low load lip and a broad aperture. All of this is a boon when you’re loading pushchairs and other bulky items.

If you're interested in buying a used Mercedes B-Class, or any of the other cars mentioned here, check out our used car classifieds site here. 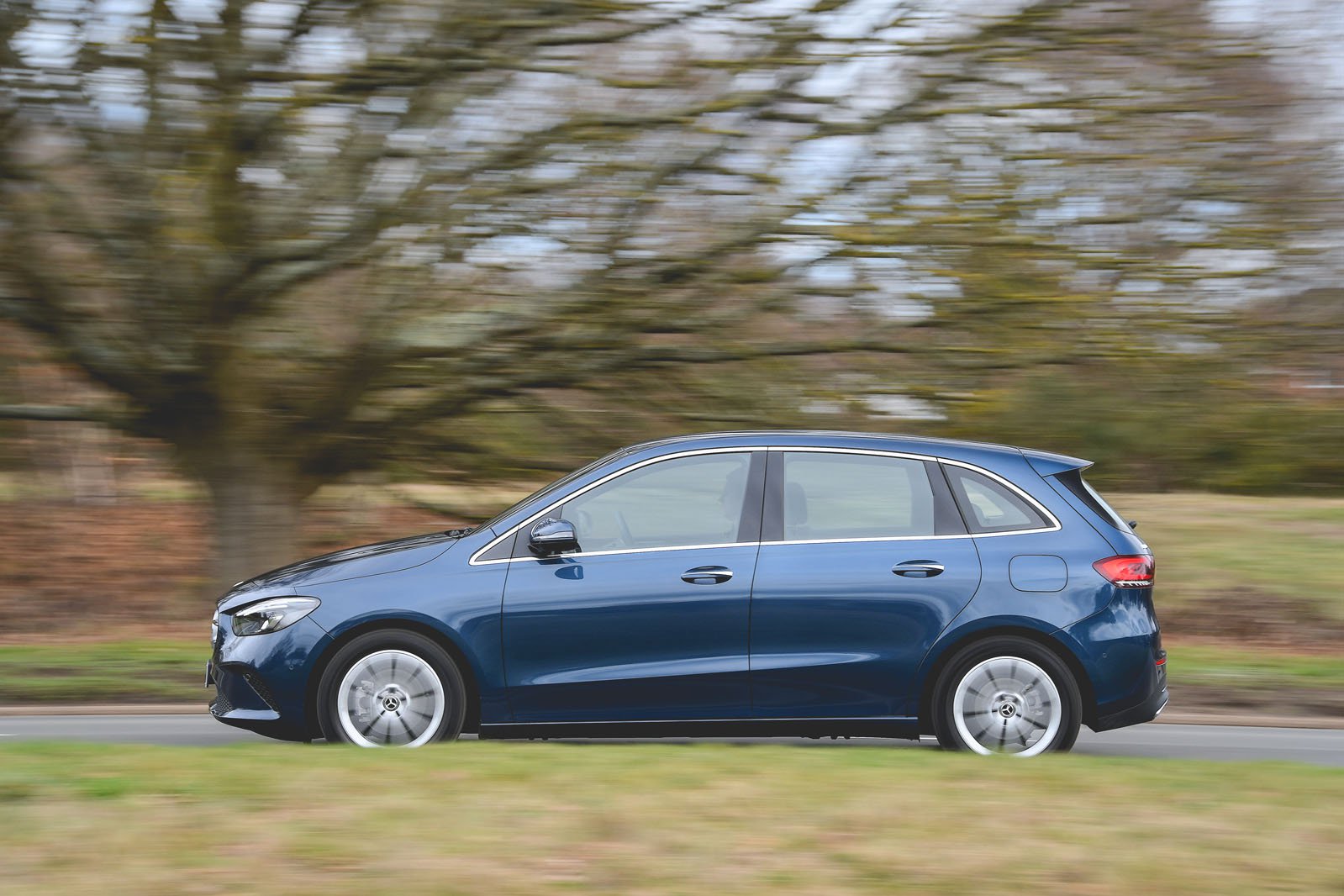