Open-top cars don’t always have to be sporty little two-seaters. You might like the wind to go through your hair at a slightly slower pace, or, perhaps, not even at all. You might like to feel the sun on your face but not sweat forming on your brow because of the stress of driving in traffic. Well, if that sounds like you, check out the Mercedes-Benz E-Class Cabriolet, because there’s no finer way of relaxing in the sun, especially when used examples begin at £8500.

That sensation of relaxation starts with the engine range, because every option has enough power to make decent progress without needing to be thrashed to high heaven. The entry-level 184bhp 200 petrol is fine for those pottering around town and even the occasional motorway jaunt; the 306bhp 350 and later 333bhp 400 V6 petrols are good for anyone looking for something sportier, while the 408bhp 500 V8 is a real rarity and a bit of a motorway missile.

Most will be well served by the 169bhp 220 diesel, which has enough performance and the best fuel economy, although the 204bhp 250 diesel is equally economical but gives you a little bit more overtaking oomph. Top of the diesel tree is the torquey 350 V6 diesel, which is as capable wafting through town as it is charging across a continent.

The only major fly in the ointment of the E-Class is the gearbox choices. The six-speed manual doesn’t really suit a classy convertible and the strange foot-operated parking brake might make hill starts a problem. The majority of examples are automatic; that's fine for the most part, but the seven-speed version can dither about which gear to be in.

Unlike the BMW 4 Series Convertible, the E-Class errs more on the side of comfort rather than providing a sporty drive. Mercedes did give the car adaptive dampers that monitor how you’re driving and adjust themselves accordingly, but you can’t override them as you can in some rivals. Potholes make the body flex and wobble slightly, too.

Those sitting in the front will be impressed by the well-built dashboard and easy-to-use controls. The infotainment system can take some time to get the hang of, but at least it comes with shortcut buttons and a rotary dial that makes it easier to operate on the move than those that require you to interact with a touchscreen.

Space is fine for anyone in the front, and if you can find a car with ‘Airscarf’, which directs warm air from the air conditioning system on to the back of your neck via vents in the head restraints, you can even drive with the top down in winter and stay warm. The rear seats aren’t bad for adults, but some rivals offer a bit more leg and shoulder room.

Boot space is pretty good, though, because the cloth roof takes up a lot less space than a folding metal one does. As with most convertibles, the boot will shrink when the roof is down, but you’ll only need to sacrifice 90 litres of luggage capacity; most rivals lose a lot more than that. 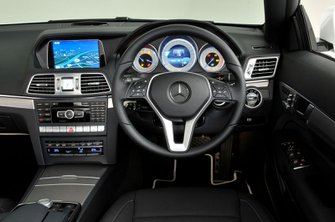