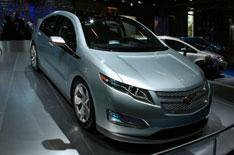 The future came to Paris, in the shape of the Chevrolet Volt.

It's no exaggeration to describe the Volt as the most eagerly anticipated car of the future although it will arrive first in the USA in 2010, before making its way to Europe in 2012.

That said, it's not exactly a looker, so why all the fuss?

Well, the four-seat Volt has a range of 40 miles on electric power alone, which should be good enough for the majority of daily commutes. It will recharge from a standard 240V socket in three hours.

However, if that's not enough, a 1.4-litre petrol engine is in place to kick in and keep the car's battery charged for a further 250 miles of driving.

The electric motor provides the equivalent of 148bhp and 273lb ft of pulling power, while top speed is around 100mph.

Detractors say the Volt is only a stepping stone until fully-electric cars come on stream, but that's missing the point.

For now, the Volt is the future, and longer-term it's likely to be the first step towards a much greener motoring future.