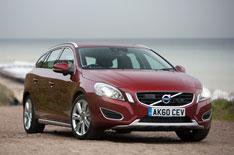 A plug-in diesel hybrid Volvo V60 with C02 emissions of just 50g/km and average economy of 150mpg will be unveiled at the Geneva motor show next month.

It will be the first plug-in diesel hybrid available from any manufacturer when it goes on sale in 2012. Prices have yet to be announced, but it's likely that it will be available in more luxurious trim only and could start at around 40,000.

It has an all-electric range of up to 32 miles, CO2 emissions of less than 50g/km and average economy of 150mpg. The low emissions mean it will be exempt from road tax and the London Congestion Charge, as rules stand.

More details are due to be released ahead of the car's debut at the Geneva motor show at the start of March.