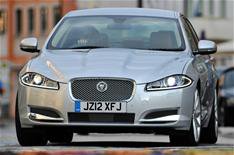 Essentially a detuned version of the 188bhp 2.2-litre engine that was introduced last year, it produces 295lb ft of torque, compared with the more powerful versions 322lb ft.

Fuel economy and CO2 emissions are identical to those of the 188bhp engine, at 52.3mpg and 149g/km respectively.

Whats the 2012 Jaguar XF 2.2D 163 like to drive?
This new model takes almost two seconds longer than the 188bhp 2.2 to get from 0-62mph, and you notice this comparative sluggishness when you ask for a long surge of acceleration.

Most of the time, however, the engine feels more than strong enough, because its happy to pull from low revs, and the standard eight-speed automatic gearbox helps to keep it in its sweet spot.

Like all XFs, this 161bhp car blends agile, rewarding handling with excellent high-speed comfort and composure. True, the low-speed ride is a little firm, but the overall ride/handling balance is still the best in the class.

Sadly, the same cant be said of the refinement. The engine rumbles a bit at tickover, and while its very quiet at motorway cruising speeds, you hear a fair amount of wind noise from around the door mirrors.

Whats the 2012 Jaguar XF 2.2D 163 like inside?
The entry-level SE model misses out on satellite-navigation and has only part-leather upholstery, but the XFs cabin is otherwise unchanged.

This means theres space for four six-footers and a fifth person if they're significantly shorter. It has numerous cool touches, including electrically opening air vents and a puck-shaped gear selector that rises out of the centre console.

The news isnt all good, though; some of the plastics feel a little cheap compared with those in the rival Audi A6 and BMW 5 Series, and the touch-screen infotainment system is fiddly to use on the move.

Should I buy one?
Even the sub-30k SE model will cost more to run as a company car than BMWs 520d SE, because the BMW has a significantly cleaner engine that places it four company car tax bands lower. The 520d Efficient Dynamics has an even bigger advantage.

Still, this new 161bhp XF is the most efficient and affordable version yet, and it doesnt feel overly compromised by its less powerful engine. Factor in the sweet drive and appealingly styled cabin, and its well worth considering.