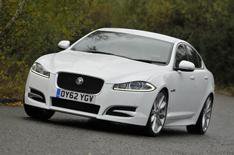 The new supercharged Jaguar XF takes over from the old 5.0-litre V8 model.

It's sad to say but the naturally aspirated V8 engine will soon be consigned to the same drawer labelled 'Dodo', certainly as far as executive saloons are concerned. So this new engine needs to offer petrol fans higher mpg and lower CO2, without compromising on performance and character.

What's the 2012 Jaguar XF 3.0 V6 supercharged like to drive?
On paper, the new engine has all the required numbers. It generates 340bhp and 332lb ft of torque, and it puts its power through the latest eight-speed automatic gearbox to the rear wheels. The car will cover the 0-60mph dash in just 5.7 seconds and hits a limited top speed of 155mph.

Unfortunately, the driving experience doesn't quite match up to the billing. While the supercharged XF is pretty quick off the mark, it struggles when you ask it to accelerate from a cruising speed because of its incredibly long gear. Even a gentle request for extra speed causes the gearbox to change down one, two or even three gears, sending the revs soaring.

There is a way to avoid this just stick the gearbox in Sport mode and use the steering-wheel-mounted paddles to select top gear. However, this blunts performance to an unacceptable degree, so you end up having to change down anyway to pick up any real pace.

Matters aren't any better when you need to get past slow-moving traffic, because when you put down your foot the transmission has to change down a number of gears, which isn't the work of a moment. Unless your anticipation is bang-on, passing opportunities can be all too easily lost. The engine doesn't even sound particularly pleasant.

Still, it helps that it's been installed in a basic package as strong as the XF's. If you're the sort who likes to take the meandering route home, the XF is for you. It steers consistently and faithfully, and always lets you know what the front wheels are doing.

Body control is superb, and the XF changes direction in a manner that utterly belies its considerable weight.

The steering is consistent and keeps the driver informed

There's a firmness to the ride at low speeds, but once you're going at a decent pace it displays a fine balance of control and suppleness.

What's the 2012 Jaguar XF 3.0 V6 supercharged like inside?
The XF's start-up party piece never fails to intrigue and amuse; the heater vents swivel open and the gear selector rises from the centre console.

The dashboard itself is easy enough to find your way around, but the touch-screen system that controls the sat-nav, Bluetooth and audio functions is still slow and imprecise.

The dash is easy to navigate, but interior quality is starting to lag behind that of rivals

The Jag is starting to really lag behind its rivals for interior quality these days. Everything looks stylish, but there's a flimsiness to the materials and the way some switches and cubby lids operate.

There's plenty of space for the front two occupants, although those relegated to the back won't be so happy. Space is tight and the seats aren't particularly well shaped.

Should I buy one?
There are better petrol alternatives. We'd be tempted to go for a BMW 535i SE instead. It isn't as quick as the XF, but it's more economical, emits less CO2, has a smarter interior and sounds better, too.

If diesel is an option, go for an XF 3.0D V6, which offers brisk performance, an average of 47.9mpg and sits a full 10 company car tax bands below this new supercharged model.