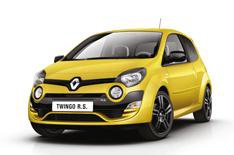 The Renault Twingo Renaultsport 133 is an updated version of Renault's
junior hot hatch.

A three-time runner-up in our Hot Hatch of the Year awards category, it remains unchanged mechanically, but gets a new look and a smarter cabin.

Renault has also axed the stripped-out Cup version, which means prices now start at 13,565 1355 higher than before.

Its an absolute riot on winding country lanes, with loads of grip and terrific body control. Our test car was even better than the standard model in these regards, because it was fitted with the optional Cup pack; this 700 option further stiffensthe Renaultsport chassis and replaces the 16-inch alloys with chunkier 17-inch ones.

The Twingo isnt just remarkably capable, though; its hugely rewarding to drive quickly, with a snappy gearchange, responsive brakes and quick, weighty steering. A slight vagueness around the straight-ahead is our only real criticism, because it makes the initial turn-in to corners a little disconcerting.

As before, power comes from a 1.6-litre petrol engine that produces 133bhp. That's a modest amount of grunt by modern hot hatch standards, but the Twingo is really quite lively once you rev it beyond 6000rpm. The 0-62mph time of 8.7 seconds is an exact match for its closest rival, the Suzuki Swift Sport.

No mechanical changes; as much fun to drive as ever

Just dont expect much in the way of comfort or refinement. The ride is firm to start with, and it becomes downright jarring if you add the optional Cup pack.

In addition, the wind and road noise that enters the cabin at most speeds becomes deafening as you accelerate up to motorway pace.

Whats the 2012Renaultsport Twingo 133like inside?
Like more mundane versions of the Twingo, the Renaultsports cabin features swathes of hard grey plastic, which feel as cheap as they look. At least things have been livened up a bit with yellow stitching on the steering wheel and seats, along with white detailing on the top of the steering wheel, seats and dashboard.

A more modern anduser-friendly stereo now fitted to all Twingos helps, too.

Even in its lowest position, the drivers seat is set rather high, but theres plenty of head- and legroom in the front, while the two sliding rear seats allow you to choose between legroom and boot space. You can have one or the other in reasonable quantity but not both at the same time.

You nowget a few more luxuries as standard, including air-conditioning, Bluetooth and cruise control. That goes some way towards explaining the higher starting price.

Should I buy one?
One of the best things about the old Twingo 133 was its low entry price, so Renaults junior hot hatch is no longer quite the no-frills pocket rocket that made it so endearing in the past. Thats a shame.

Make no mistake, its still an utter hoot on a zigzagging B-road, but a Suzuki Swift Sport is equally fast and fun, costs less to buy andinsure, and comes with more standard equipment.

Better still, the Suzuki is much easier to live with on a daily basis, with a smarter cabin, a more forgiving ride and an extra gear for more relaxed cruising.