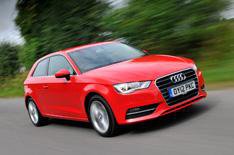 Weve been mightily impressed by the new Audi A3. However, weve now driven what could be the best version of all the 1.4 TFSI SE.

This was our favourite version of the old Audi A3 due to its impressive mix of perky performance and affordability, and were expecting the engine to be even better in the new car.

This makes it extremely flexible, responding to any prod of the throttle with impressive immediacy and strength. The power is delivered smoothly and consistently throughout the rev range, and if you keep the revs high, the car has more than enough pace to keep most drivers entertained.

Youll also enjoy the A3s handling, which is agile and predictable. The car feels light on its feet, which is no surprise given that it weighs up to 80kg less than the old A3. The tightly controlled body movements help, too, while theres plenty of grip.

True, the A3 doesnt feel quite as sporty as it might because the steerings initial responses are on the slow side. However, its reassuringly weighty and accurate after that, so you can still plough down your favourite country road with confidence.

Initial steering response is rather slow, but it's reassuringly weighty and accurate

You might not be quite so thrilled when you enter the city limits, though, because the A3s ride has a firm edge. Thats on the SE suspension set-up, too, which is the most compliant of the three arrangements on offer. However, it never gets anywhere near the point where youre begging for mercy, and things improve the faster you go.

Thats good news, because it gives the A3 pretty good cruising ability. It also helps that the engine stays impressively hushed at 70mph, and that wind noise is well contained.

What's the 2013 Audi A3 1.4 TFSI 122 like inside?
You expect any Audi to at least trouble the class leaders on interior quality, but the new A3 raises the bar several notches.

Compared with other small family hatchbacks, the new A3's interior raises the bar for interior quality

The materials have the plushness of those youd find in an executive saloon, and the assembly is close to flawless. Every switch feels substantial and beautifully damped, which also helps contribute to the money-no-object feel. The A3's cabin really is something to behold.

It's pretty high-tech, too, because the car comes with the latest version of Audis MMI (multimedia interface) as standard. This has the central control dial that Audi drivers will be familiar with, but the shortcut buttons have been replaced by raised toggle switches, which are easier to use at a glance.

Finding a comfortable driving position is also easy because theres loads of adjustment in the seat and steering wheel. Granted, rear space is a little tighter than in a BMW 1 Series or VW Golf, but two six-foot passengers will still fit comfortably. Access isnt bad, either.

The boot is also one of the biggest in the class at 365 litres, and thanks to an adjustable boot floor, the rear seats fold almost flat when you need more.

The SE-trimmed car we tested comes with most of the essential creature comforts as standard; you get alloy wheels, manual air-con and Bluetooth with voice control.

Should I buy one?
Whichever way you look at it, the Audi A3 is one of the finest cars in the ultra-competitive small family hatchback class. Whats more, the 1.4 TFSI SE version tested here is the best weve driven so far.

Its also the cheapest version currently on sale, and undercuts rivals such as the BMW 116i SE 3dr and the five-door-only Mercedes A180 SE.

It costs around 1150 more than the equivalent version of the forthcoming VW Golf. Both cars have the same engine, so running costs will be pretty much identical both average 54.3mpg and emit 120g/km.

However, with the Audis swankier interior and more premium image, we can easily see why youd spend the extra. With this engine, the A3 also gets a more sophisticated rear suspension set-up than the Golf.

The A3 will probably have slightly stronger resale values, too.

Read the full Audi A3 review >>