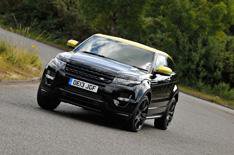 The Range Rover Evoque Special Edition is the most expensive version of the car that you can buy.

There are no mechanical changes over the regular 2.2 SD4 model, but the Special Edition gets a host of visual upgrades (inside and out), designed to make it even more desirable.

You can choose Sicilian Yellow paint with a black roof and door mirrors, or the same colour scheme reversed, but all cars get yellow interior stitching and dashboard trim.

However, the way it drives is severely hampered by the slow-witted six-speed auto gearbox. It regularly changes down unnecessarily early, and dithers when pulling out of junctions.

On the plus side, the steering is quick and precise, and the Evoque manages to keep its lofty body comparatively well controlled through tight twists and turns.

Switching to Dynamic mode, which is a standard feature on the Special Edition, firms up the suspension and makes the Evoque more agile through corners.

However, the standard 20-inch alloys and low-profile tyres do little for the Evoque's already choppy ride, especially at low speeds across broken surfaces. Smaller imperfections are smoothed out well enough at motorway speeds, but potholes or expansion joints send jolts through the cabin.

While engine noise fades into the background at the motorway speeds, the tyres kick up a fair amount of road noise, and the Evoque's large door mirrors make wind noise an issue, too.

What's the 2013 Range Rover Evoque Special Edition like inside?
Other than the yellow stitching and trim accents, the Special Edition's cabin is identical to any other Evoque's.

That means there's enough room for four six-footers, although the three-door Coup version is a little tighter than the five-door, and gaining access to its rear seats is tricky.

In both body styles, the rear cabin is fairly dark, but the optional panoramic glass roof brightens things up. The boot is a little on the small side, with a high floor, and the rear seats don't fold completely flat.

There's plenty of head- and legroom in the front, and the generous adjustment on the steering wheel means even the tallest drivers should find their ideal seating position.

The high driving position gives excellent forward visibility, but the view out of the back is compromised by the Evoque's styling, which forces a pinched rear screen and thick pillars.

The Dynamic Plus Pack (usually 2850) is included as standard, and adds brushed aluminium interior trim and adjustable black leather sports seats. The seats provide excellent support, but are less forgiving than those in the standard car.

The Special Edition is based on the range-topping Dynamic trim and gets plenty of equipment. Climate control, automatic xenon headlights, heated leather seats, Bluetooth, sat-nav and a USB connection are all standard.

Should I buy one?
The Special Edition Evoque won't suit all tastes, but if you like the looks and want loads of goodies, it does make a reasonable case for itself. It might cost around 6900 more than the SD4 Dynamic model on which it's based, but you'd have to spend even more money to spec that car to the same level.

However, we'd be tempted to wait for the new nine-speed automatic gearbox, which is due to arrive this autumn, promising a smoother drive and improved efficiency.