Alfa Romeo's range-topping Giulietta QV gets the engine and gearbox from its 4C sports car, to help it tempt hot-hatch fans away from the Renaultsport Megane and Volkswagen Golf GTI... 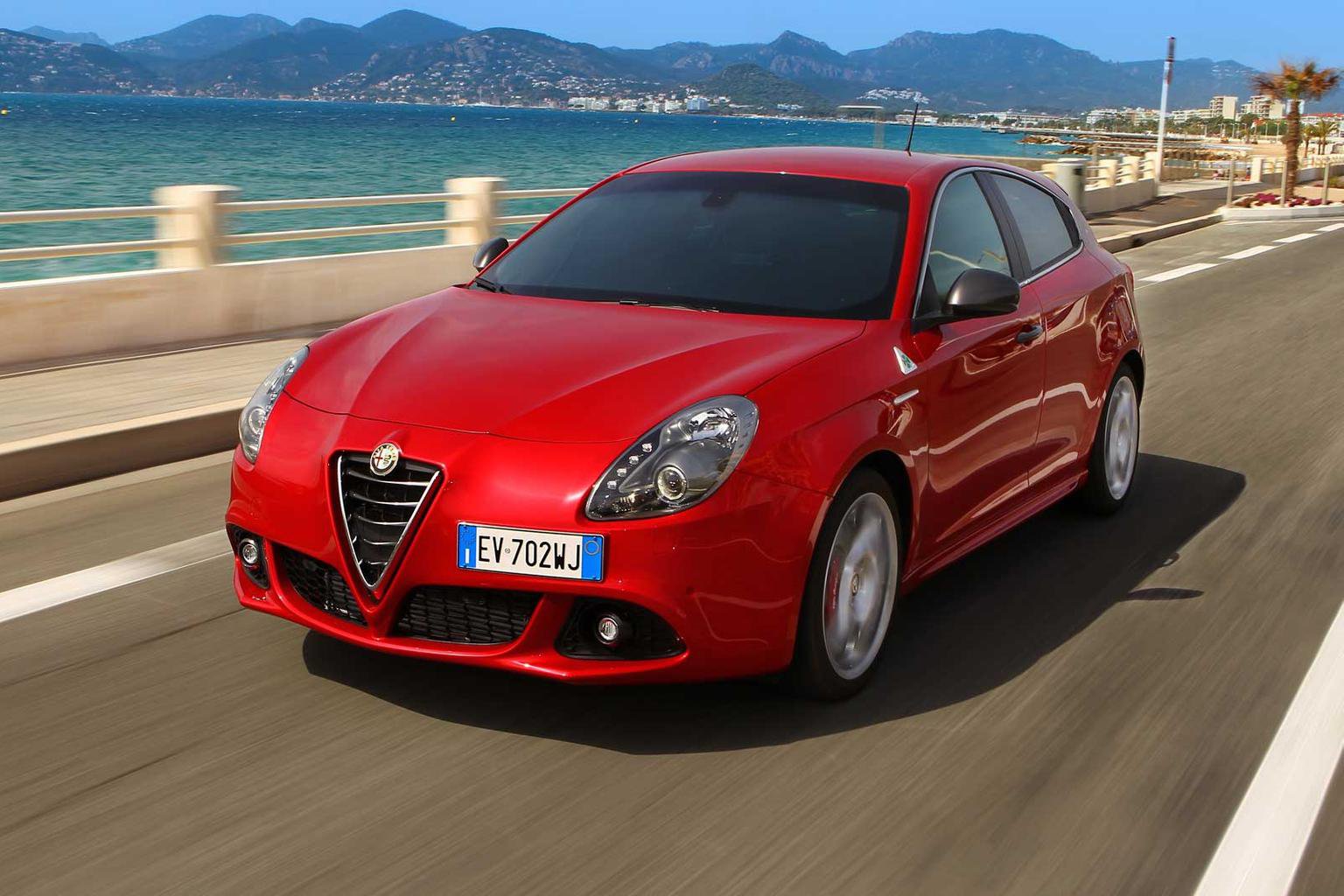 The sporting Cloverleaf name lives on for Alfa Romeo in 2014, albeit in Italian, with its range-topping Giulietta hot hatch now called the Quadrifoglio Verde.

It's not just the name that has changed: underneath there's a new engine and gearbox – the 237bhp 1.75-litre turbo petrol and TCT twin-clutch gearbox from Alfa's exotic 4C sports car.

Although the Giulietta is considerably heavier than the 4C, hot hatch fans needn't worry, because it's now capable of sprinting to 62mph in six seconds and reaching a top speed of 149mph.

Still, it needs to be more than just quick for us to recommend it ahead of cheaper rivals such as the Seat Leon Cupra or Volkswagen Golf GTI.

What’s the 2014 Alfa Romeo Giulietta Quadrifoglio Verde like to drive?

Alfa's three-mode DNA system is standard, and has three modes – D for Dynamic, N for Normal and A for All-weather. With it set to D – which makes the Giulietta's throttle response as sharp as it can be – the Quadrifoglio Verde feels suitably fast, emitting a throaty exhaust note.

A launch control mode is included to help you achieve that headline 0-62mph sprint time, but more importantly, peak pulling power arrives from a useful 1800rpm when accelerating through the gears.

It's just a shame there's a momentary pause when accelerating hard, because the gearbox dithers on downchanges in auto mode. Also the engine's delivery, while smooth, comes in a short burst and over a relatively narrow band of revs.

Flicking through gears using the wheel-mounted paddles is more satisfying, helping you to keep the engine in its sweet spot and ensuring you stay in the right gear at the right time.

Driven at normal speeds in the more subdued 'N' mode, the Giulietta's steering feels light enough to make tight manoeuvres in town easy work. Start to push hard into tight bends, though, and no matter which mode you select, the steering feels slow, vague around the straight ahead and inconsistent.

Ultimately, the more precise steering set-ups of the Megane Renaultsport and Golf GTI are both more involving, and these rivals also offer more grip at their front wheels when turning into bends, and control the way their bodies lean better, too.

The Quadrifoglio Verde's suspension is the same as any other Giulietta's, but has been lowered by around 10mm. This hasn't helped the ride much, and on our Italian test route it felt quite unsettled over broken surfaces; large potholes sent shudders through the cabin.

At a steady cruise, the engine does settle down nicely, and there's very little wind noise in the cabin. Unfortunately, road noise is more of an issue thanks to the standard 18-inch alloy wheels.

What’s the 2014 Alfa Romeo Giulietta Quadrifoglio Verde like inside?

The Giulietta QV is marked out from the rest of the range by a uniquely finished cabin that includes a sports steering wheel, new instrument panel sporting the QV logo and one-piece front sports seats.

There are no problems adjusting the new seats to the perfect driving position, and they keep their occupants firmly in place through tight corners while providing decent support on motorways.

The dashboard is glossy, but feels cheap, as do some of the plastics on other parts of the cabin that you'll come into regular contact with, such as the electric window switches and gearstick.

On the plus side, Alfa's new infotainment system, called Uconnect, is standard. It has a 6.5-inch colour touch-screen and an SD-card reader instead of a CD player, and it's through this that you control the sat-nav system, DAB radio and Bluetooth. USB and aux-in connections are standard, too.

Rear passenger space is worse than you'll find in any of the Giulietta's rivals. The rear door opening slopes down at the back, making access trickier than it should be, and there isn't a great deal of head- or kneeroom, especially when you're behind a taller driver.

Like all Giuliettas, the boot is also behind its rivals', because it has a high lip and narrow opening, and although the rear seats split 60/40, they don't fold down completely flat.

Alfa Romeo will begin sales of the Giulietta Quadrifoglio Verde in July, with 100 launch edition models priced at £30,280 which get unique styling. After these have sold out, prices start from £28,120.

There's no doubting the Giulietta is very generously equipped, or the fact that it offers good performance from its new engine but that pricing pushes it into the same territory as a Golf R.

Ride, handling, running costs and an element of practicality are all equally important to hot hatch buyers, though, and in all these respects the Giulietta fails to compete with the class best.