* Four-seat drop-top set for Frankfurt debut * Roof comes in black, grey or brown * Due on sale in first half of 2014... 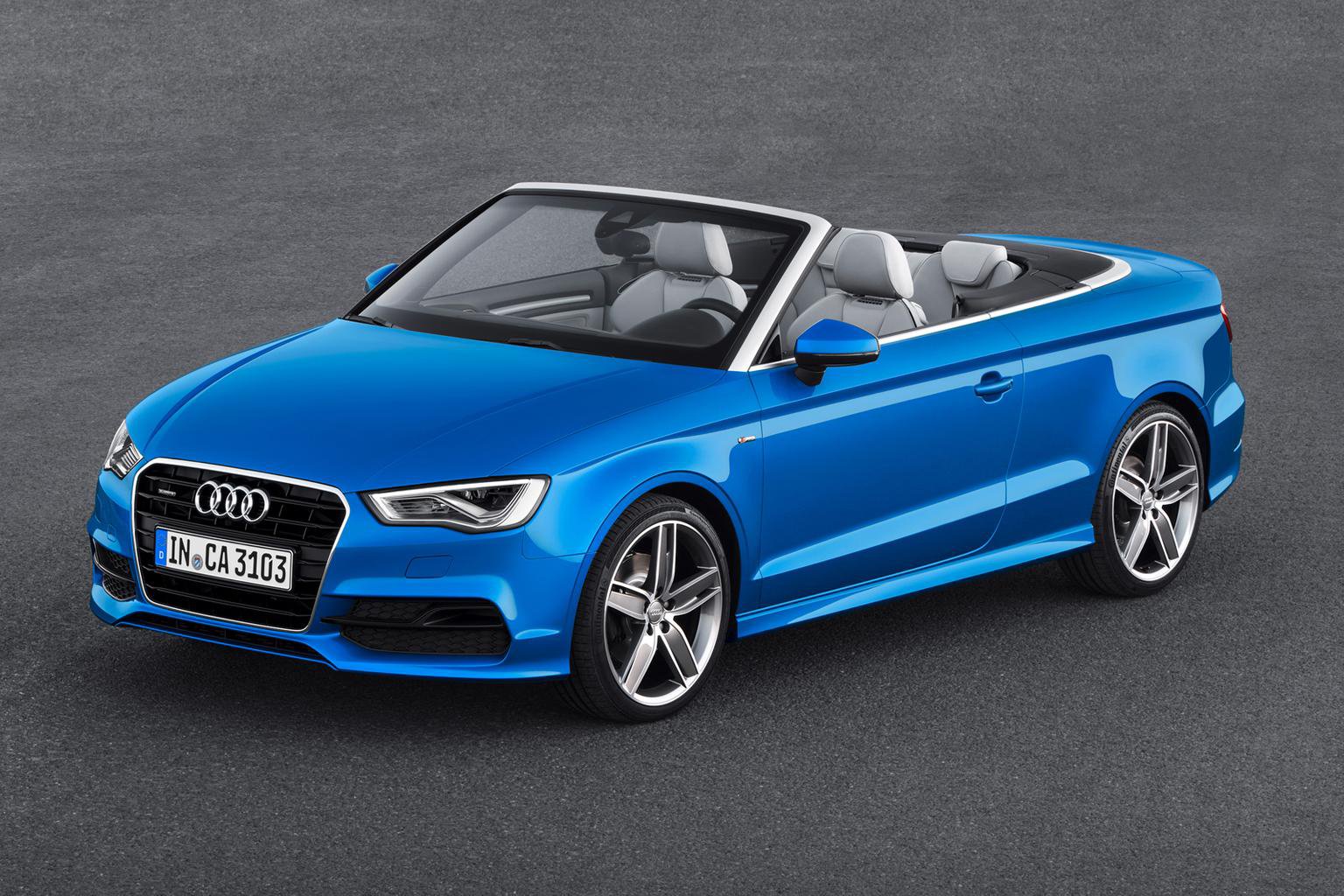 This is the new Audi A3 Cabriolet, revealed ahead of its public debut at the Frankfurt motor show.

The new A3 Cabriolet is the first drop-top to be based on the VW Group's latest chassis technology, called MQB. It is longer and wider than the car it replaces, but lower. Audi claims the car is a significant 50kg lighter than the old model.

The four-seat Cabriolet's front-end styling looks similar to that of the three-door A3, A3 Sportback and A3 Saloon. It also gets those cars' side crease, which runs from the front lights all the way to the bootlid. Audi appears to have achieved a neat roof installation, with a flush fit behind the rear seats and only a very small hood 'hump'.

The roof, which uses lightweight magnesium parts under its cloth covering, can be opened or closed in around 18 seconds, and at up to 30mph. Audi claims that the 297-litre boot is barely affected by folding the roof; its three pieces are stored in a tray above the boot compartment. The roof fabric will be offered in a choice of black, grey or brown.

Audi will offer a wind deflector on Ambiente trim, and heated headrests will be available as an option. The rest of the cabin is familiar A3 fare, with a simple, uncluttered dashboard design.

The A3 Cabriolet's range will be launched with a pair of turbocharged petrol engines - a 1.4 with 138bhp and a 1.8 with 178bhp - and a 2.0-litre turbodiesel producing 148bhp. Audi has already confirmed that a 1.6-litre diesel will follow soon after the car's debut.

The 1.4 petrol gets Audi's cylinder-on-demand tech, which closes down cylinders when they're not required to save fuel. It has enough power to take the A3 Cabriolet from 0-62mph in 9.1 seconds, but returns a claimed 56mpg and emits 114g/km of CO2.

The standard transmission will be a six-speed manual, although the 1.8 TFSI petrol will be offered with Audi's seven-speed automatic gearbox.

Audi has already confirmed that a high-performance S3 Cabriolet is on the way. It'll get a 296bhp 2.0-litre turbocharged petrol engine, four-wheel drive and a six-speed automatic transmission, and will be capable of 0-62mph in 5.4sec.

Audi has yet to confirm a precise on-sale date for the A3 Cabriolet, but we'd expect the order books to open in the first quarter of 2014. Prices should rise slightly over the current car, giving it a starting figure of around £22,000.