The Mercedes A250e is a new plug-in hybrid with an impressive electric-only range. Time to find out if it's as good in other areas... 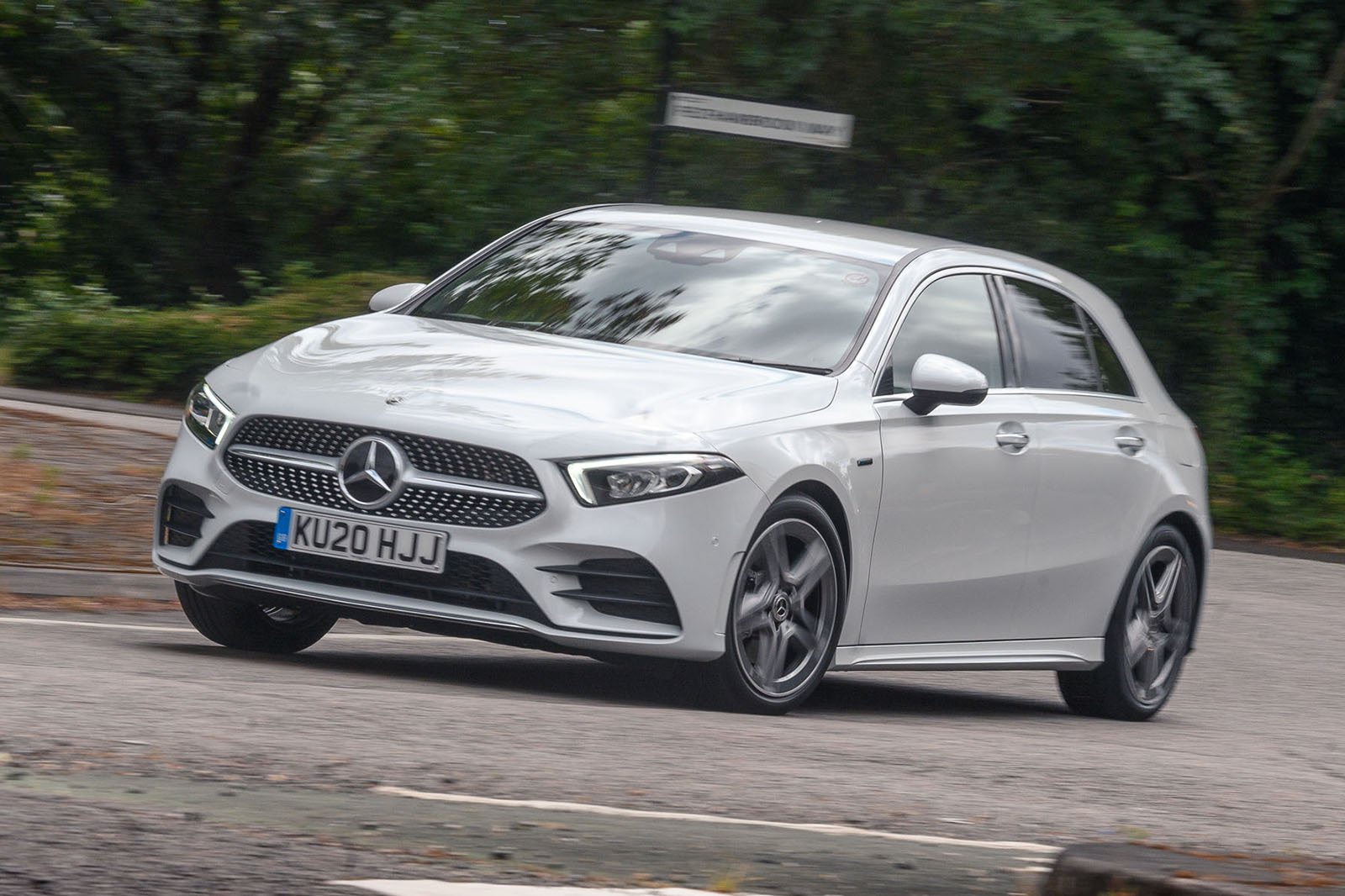 If you’ve already got your order in for the latest MacBook Pro, follow Elon Musk religiously on Twitter and are always on the lookout for the next exciting new bit of tech, the new Mercedes A250e might just be the hatchback for you.

Like the popular but now defunct Volkswagen Golf GTE  (more on that later), the A250e is a plug-in hybrid. That means the regular engine under the bonnet is assisted by an electric motor that’s powered by a battery that can be charged from the mains. In theory, this should give you both punchy performance and exceedingly low running costs.

The easiest way to spot the hybrid A-Class from a regular one is by looking for the ‘EQ Power’ badges on the front wings, and of course the A250e text on its rump. If you really play spot the difference, you’ll also see that it has a flap for fuel on each side; the one on the left is for petrol, the one on the right for electricity. 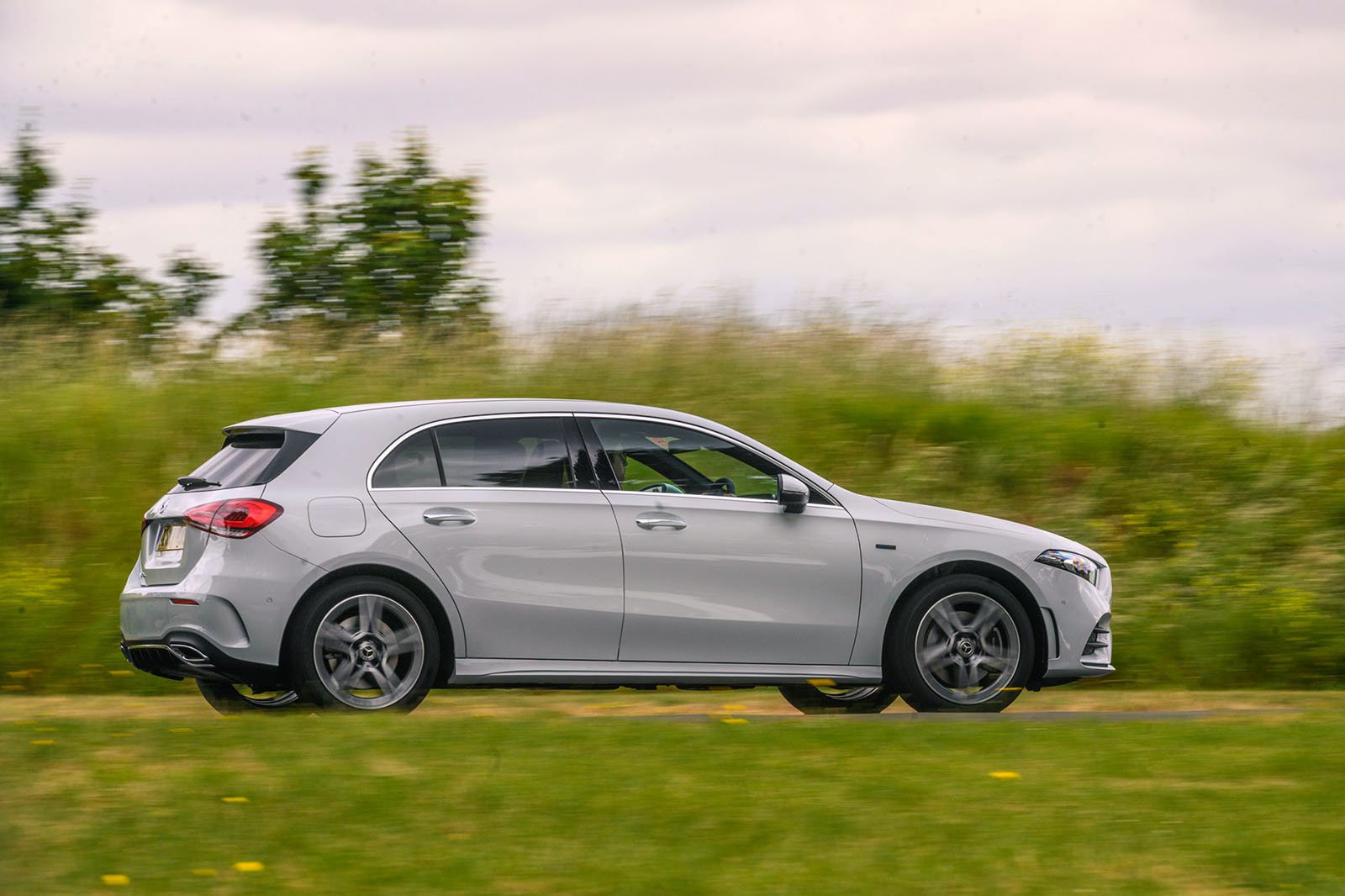 The A250e uses a 1.3-litre petrol engine that's good for 158bhp, with the electric motor boosting this to a healthy total output of 215bhp. Official emissions of 25g/km, and a claimed all-electric range of 44 miles, make it an exceedingly tempting company car with a mere 6% BIK rate. Official combined fuel economy of 256.8mpg takes into account the electric-only range; on our 140 mile test route (a tough mix of A and B-roads, a stretch of motorway, plus plenty of towns and villages) we saw a still-impressive 68mpg on the trip computer, using a mixture of petrol and electric power.

You also get several driving modes on the A250e. As well as the usual Comfort and Sport, you also get two new ones: Electric and Battery Level. The latter limits your power to give the longest electric range possible, whereas the former gives you silent electric-only running at full power even if you floor the accelerator pedal.

On the topic of range, we managed to travel over 40 miles on EV power alone, which we reckon should be plenty for city dwellers or those with an average commute. In Electric mode you get nippy, silent acceleration that'll take you up to 87mph, so you can easily keep up with fast-moving traffic. You can top up the A250e from a 7.4kW wall charger from 0-100% in an hour and a half.

However, once the petrol engine is needed, it awakens noisily, and the A250e switches between power sources with a bit of a jolt. This is particularly noticeable when you accelerate aggressively – the Renault sourced 1.3-litre petrol sounding rather thrashy as it approaches redline. Of course, once you reach your cruising speed the engine does settle down quite a bit, but it’s disappointing that the A250e, like the rest of the A-Class range, suffers from quite significant wind and road noise. 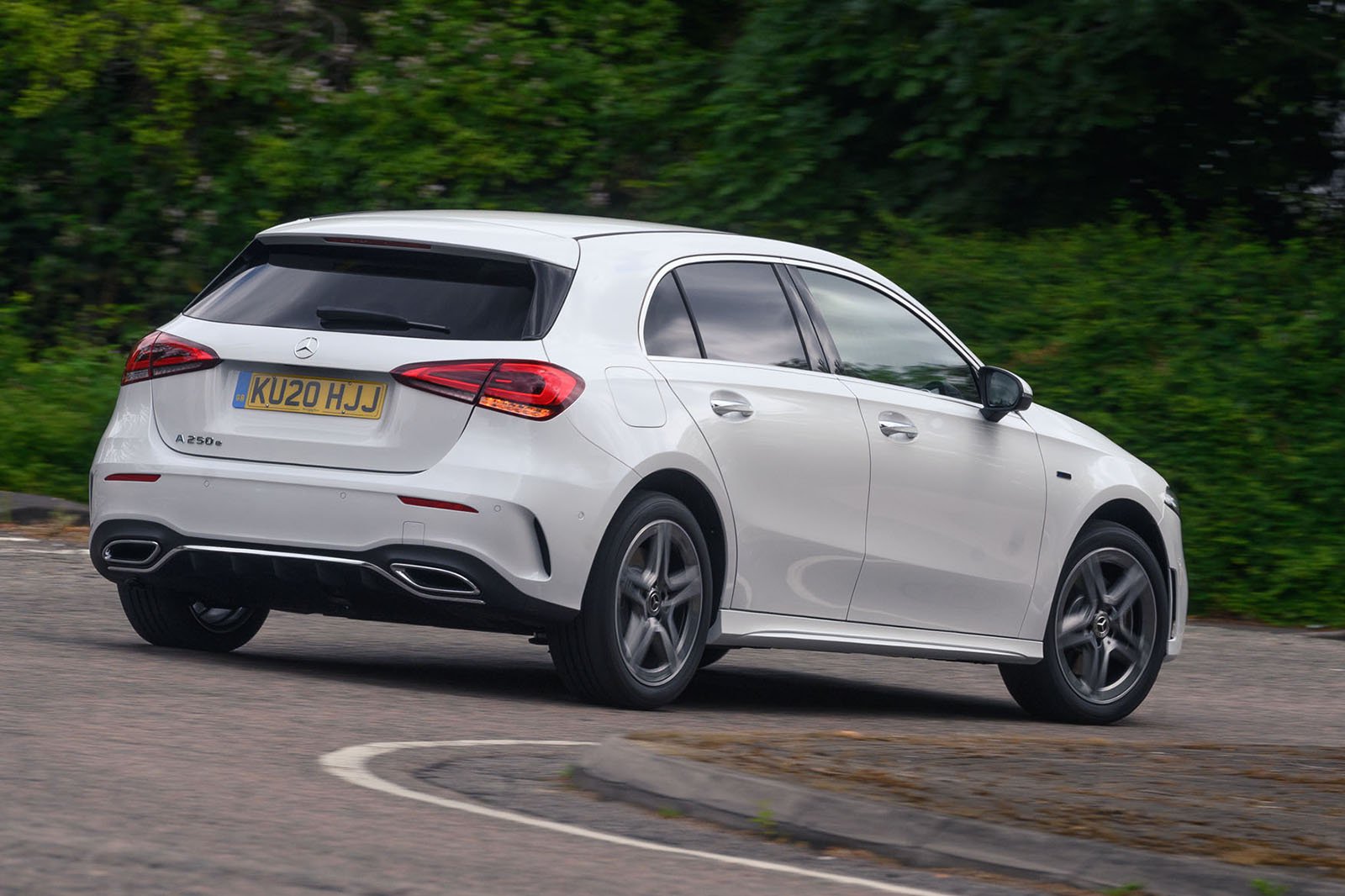 In Electric mode, you can adjust how much regenerative braking you get via the steering wheel paddles, taking it from barely noticeable to, "Hey, I don't need to touch the brakes at all". Speaking of which, brake feel in the A250e is poor. Compared with those of most regular cars, the brakes on the A250e are rather grabby and inconsistent in their responses. While no hybrid car has mastered brake pedal feel yet, the A250e is far from the best.

The whole hybrid system has also added about 200kg (approximately the weight of two burley bouncers) to the total weight of the A-Class, and that has an effect on handling. Now, we must admit that non-AMG A-Class models were never the last word in driving fun, but there is no ignoring that the A250e leans more in fast corners and runs out of grip sooner than the ‘regular’ A250. Overly light steering with little sense of connection to the front tyres doesn't give you much confidence in bends, either. So even though the A250e's 0-62mph acceleration time of 6.6sec is similar to that of the Ford Fiesta ST hot hatch, you won't be able to keep up with the fast Ford in a challenging sequence of corners.

That said, we suspect most A250e owners will spend the majority of their time sitting in rush hour traffic or plodding up and down the motorway, rather than driving their car on its door handles. Therefore, we reckon the improved fuel economy and superior refinement that those batteries bring far outweighs the added bulk.

And in terms of ride quality, we were surprised to find that the A250e is almost as composed as its lighter petrol powered counterpart. Yes, it does occasionally shudder over larger abrasions such as potholes and manhole covers, but it’s never uncomfortable, while on the motorway you’d be hard pressed to tell the difference between the A250e and a non-hybrid A-Class. 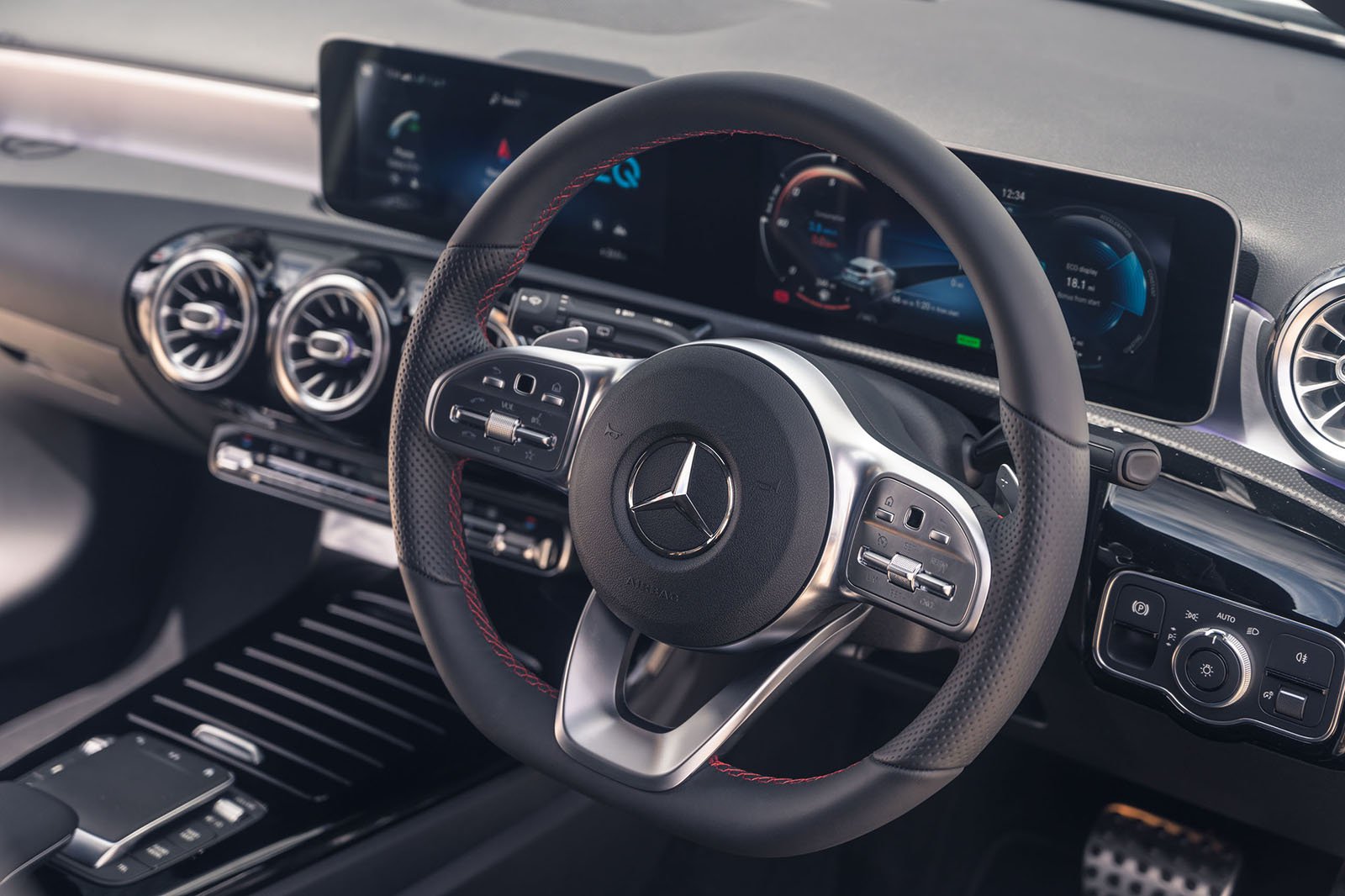 Inside, it’s pretty much identical to the regular A-Class, with big digital displays, sweeping curves and discreet ambient lighting. But although everything looks good, it doesn’t feel as solidly screwed together as the Audi A3. New for the A250e are hybrid-specific displays for the digital dials that tell you how much electric power you’re using, your range and the level of regenerative braking you’ve selected.

As for passenger space, it remains unchanged, thanks to the battery being positioned under the rear seats and a smaller, 36-litre fuel tank. The rest of the electrical equipment is tucked under the boot floor, so you lose the little bit of underfloor storage of the regular A-Class. This also has the effect of raising the boot floor ever so slightly, reducing boot space from 370 litres to 310, which is roughly the same capacity as you get in a Peugeot 208 or Vauxhall Corsa. In other words, it’s spacious enough for a big weekly shop or a weekend away in the country, but you might struggle a little if you’re planning a four-up family ski trip.

For more details on the interior and just how impressive the infotainment system is, have a look at our full Mercedes A-Class review. Or to see how much you could save on an A-Class without any haggling, check out our New Car Buying service.