Huge performance from an awe-inspiring V12 engine and a drop-top experience to savour – is the Ferrari 812 GTS the best convertible you can buy?...

The name may be different, but it's still super and still fast – and dropping the folding hardtop roof adds some extra drama for your hair and ears.

The GTS uses the same front-mounted 6.5-litre naturally-aspirated V12 engine as the Superfast, with power sent to the rear wheels via a seven-speed dual-clutch automatic gearbox. At 789bhp, this is the most powerful production car with a convertible roof you can buy. It’s also the first series-production V12-engined convertible Ferrari for more than 50 years, following the Ferrari 365 GTS4.

And it’s got a tough job, because it needs to deliver supercar thrills as well as true ‘grand tourer’ cross-continental two-seat luxury. Other high-end drop-top rivals come in the shape of the Aston Martin DBS Superleggera Volante, the Lamborghini Aventador SVJ Roadster and the upcoming McLaren 765LT Spider. 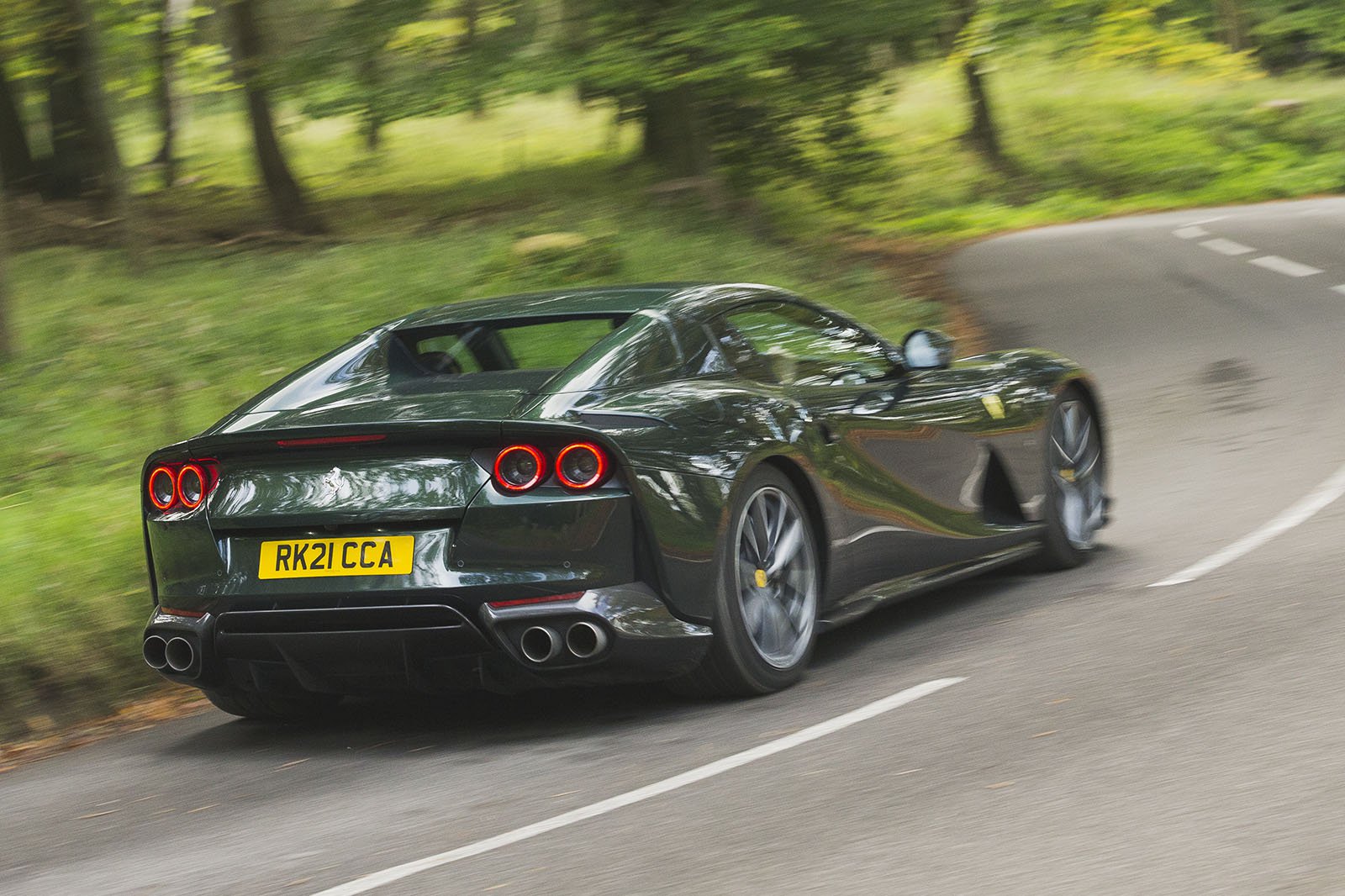 The difference between the 812 GTS and the Ferrari 812 Superfast is, as we said, the roof. While the Superfast has a fixed one, the folding hard-top in the GTS can balletically stow itself away in around 14sec – and it can do so as you travel at speeds of up to 28mph.

With the barrier between ears and exhaust removed, you’re even more connected to that orchestral V12 scream.

If you flick the wheel-mounted Manettino driving mode switch from Sport to Race, you can fully bask in the deep and bassy lows swinging through to the wailing highs as you chase a redline that almost tickles 9000rpm. It’s a thrilling noise that few other road cars can rival, and can be enjoyed with impressively little wind buffeting, even at motorway speeds.

Still want the volume but don’t want the rain? Ferrari must have had Britain in mind when it added the letterbox-style central rear window, which can be lowered with the roof up or down, to keep you dry and warm but still connected to the rabid exhaust note.

The performance that unlocks this sound is brain-melting. The breathtakingly immediate response of the engine and staggering pulling power at any speed in any gear is sensational. The 0-62mph sprint is done in less than three seconds and the top speed is 211mph – even staring at the numbers on paper is enough to make your fingers tingle.

To safely explore the lower reaches of the accelerator pedal you will need warm, dry roads and all of Ferrari’s electronic wizardry left on.

What you can appreciate at any speed is the seven-speed automatic gearbox: it’s one of the best around. Left to its own devices, its shifts are silky smooth and lightning quick, but more often than not you’ll prefer to use the incredibly satisfying trigger-like metallic column-mounted paddles, which are an event themselves. 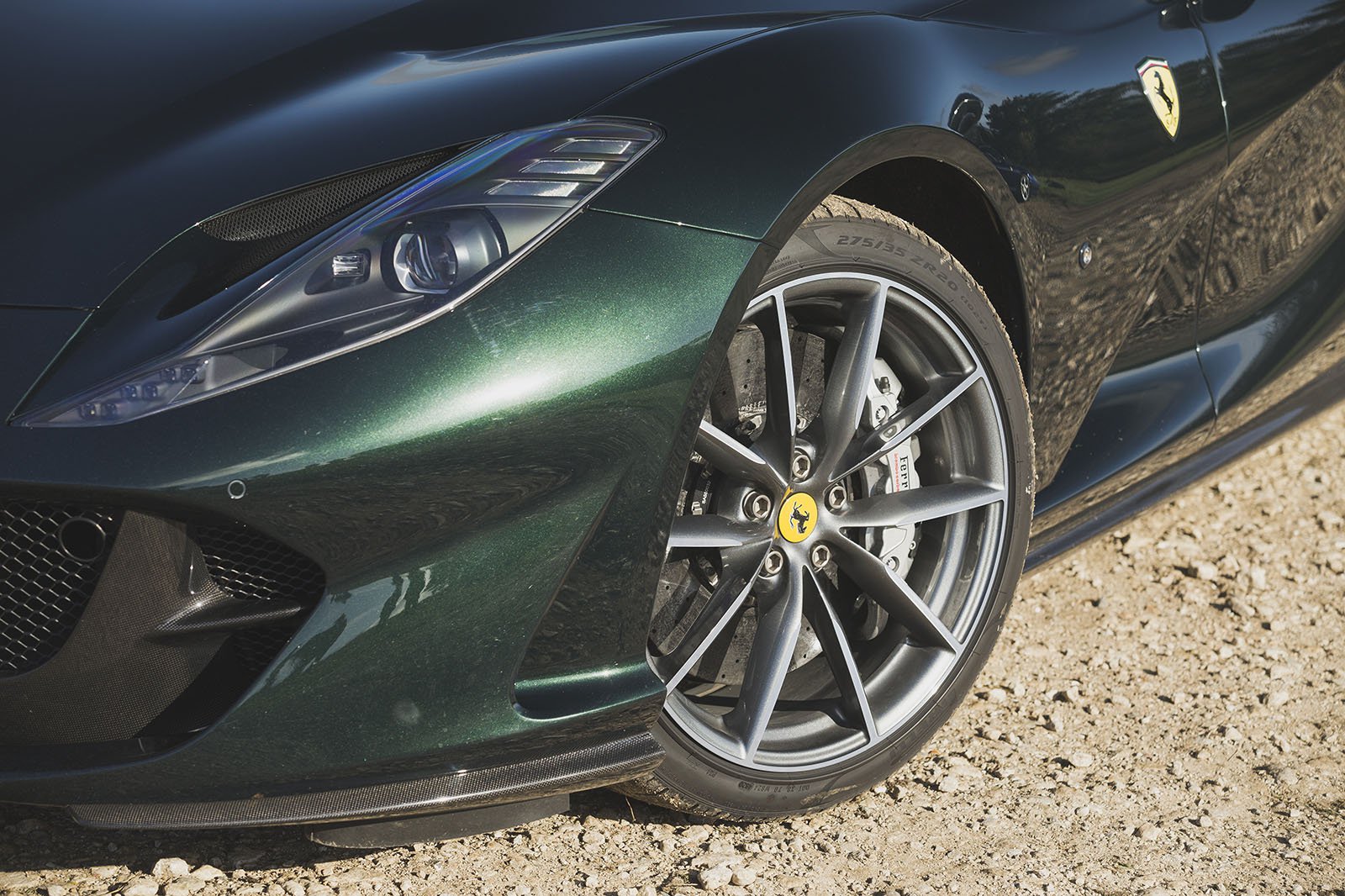 While it's certainly not a small car, the 812 GTS does change direction with remarkable nimbleness. The standard rear-wheel steering helps the car turn into corners with a real eagerness and unflappable sense of agility. The light and very quick steering can take a bit of getting used to, though.

The setup it has, which is typical of a Ferrari, means even gentle and slight steering inputs can make things feel a little twitchy. You’ll soon get used to it and enjoy the crushing pace you can carry around B-roads, and the standard carbon-ceramic brakes make it easy to stop smoothly and quickly.

The ride is far from uncomfortable, but it is firm. There’s a ‘bumpy road’ setting which slackens off the adaptive suspension and helps it flow a bit better over British roads, but it does still shimmy over some road imperfections. It will demolish huge journeys in a comfortable manner for a sports car, although it’s not quite the cushioned cruiser that the Aston Martin DBS Superleggera Volante is.

The 812 GTS is quicker than the Aston, and sounds considerably more inspiring, too. While the Lamborghini Aventador SVJ Roadster might be a match for the performance of the Ferrari, it’s more hardcore and uncompromising over long distances. 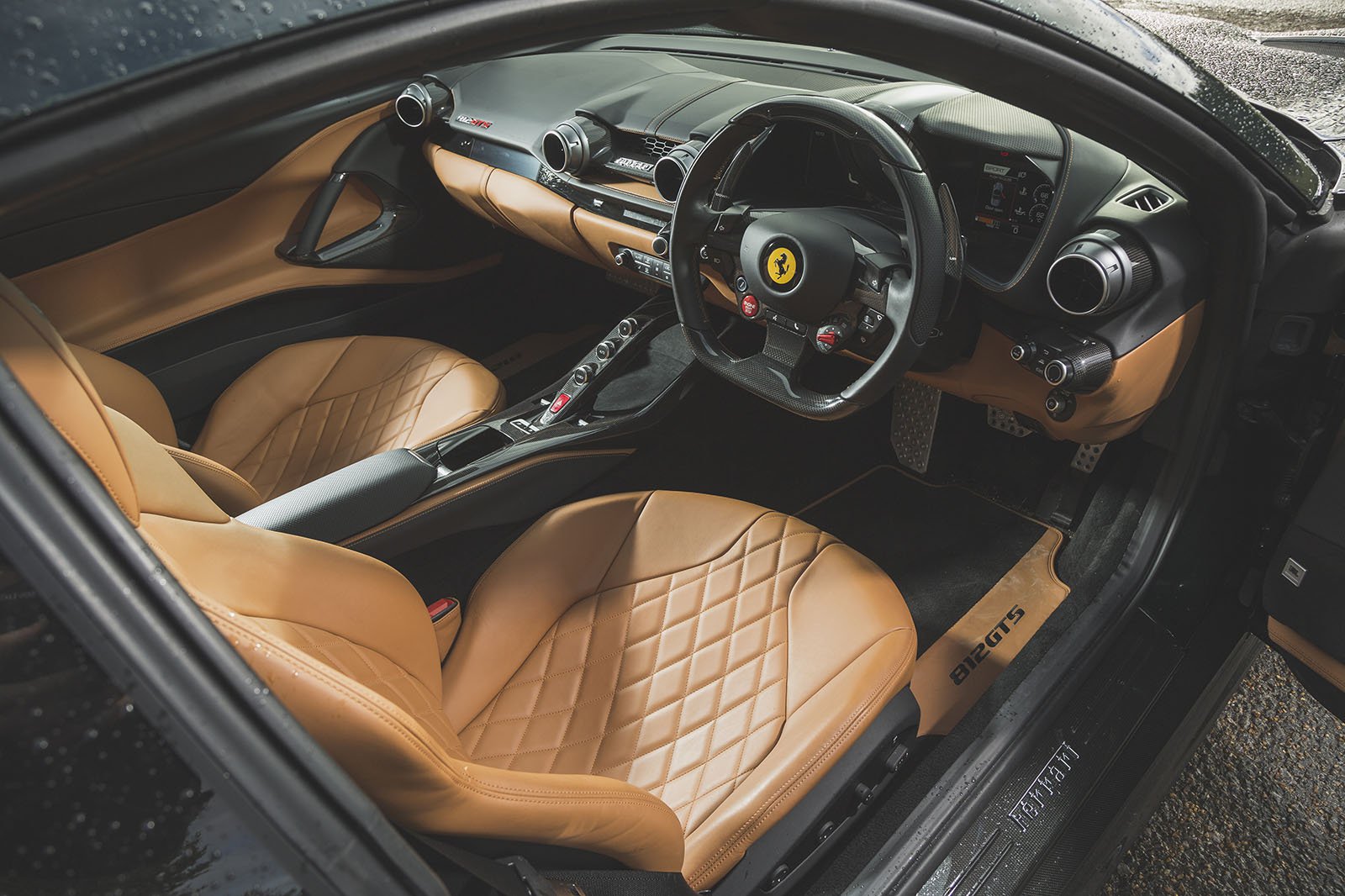 The interior of the 812 GTS is, as you’d hope, incredibly driver-focused and simple. You control most things (including indicators and windscreen wipers) via the steering wheel. Reverse, launch control and auto mode for the gearbox are down on the centre console.

Staring you in the face is an intimidatingly huge rev counter with crystal-clear single digits that dare you to approach them, and they’re flanked by two 5.0in digital screens. The right display gives your speed, trip computers and other driving information, while the left is for the infotainment system. It’s relatively easy to cycle through different screen layouts.

The infotainment system is pretty simple to get your head around too, and the Apple CarPlay integration is slick – and you’d hope so, given that smartphone mirroring is a £2000-plus option. It’s also great that all the readouts and displays are easy to see regardless of your driving position. 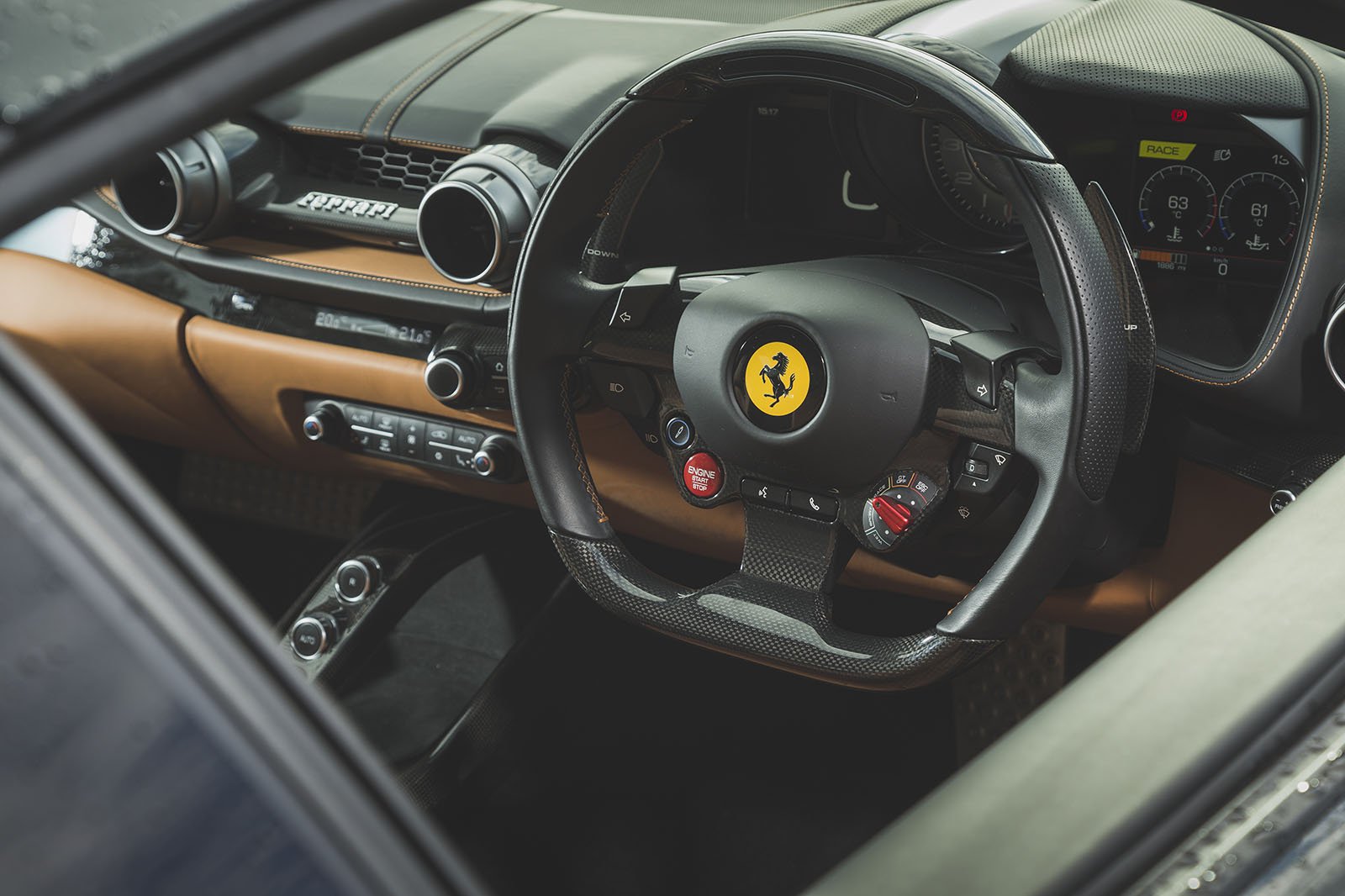 The screens are controlled by buttons on the dashboard just beneath them. They're easy to use for the most part, but they feel more Fiat than Ferrari – disappointing in a car with a starting price that would buy you a house. Aside from some of those plasticky buttons, most other materials do feel high quality, and you can tick away on the options list to swap most of it for carbonfibre.

For a two-seater, there’s ample space. Even on a long continent-crossing drive there won’t be any sense of claustrophobia creeping in. You can even keep your passenger entertained with another touchscreen panel in front of them on the dashboard. It’s a £3360 option and allows them to see and control certain functions, including media and sat-nav, and can also display the speed you’re going and the G-force you’re feeling.

You’ll be able to take a surprising amount of luggage away with you (for a sports car). The folding roof does rob some upper storage space compared with the 812 Superfast (320 litres of storage and a hatchback opening becomes 210 litres and a saloon), but there’s still enough room for a large suitcase or a few soft bags. A trip to Ikea is off the cards, though. 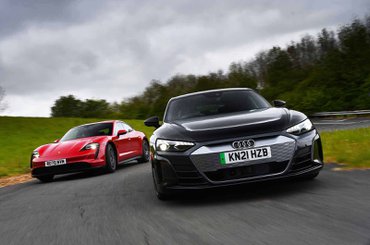 Every 5-star car on What Car?: sporty cars