* Audi A3 or Audi Q3? All you need to know * Should you buy a family hatch or small SUV? * Best versions named – and the ones to avoid... 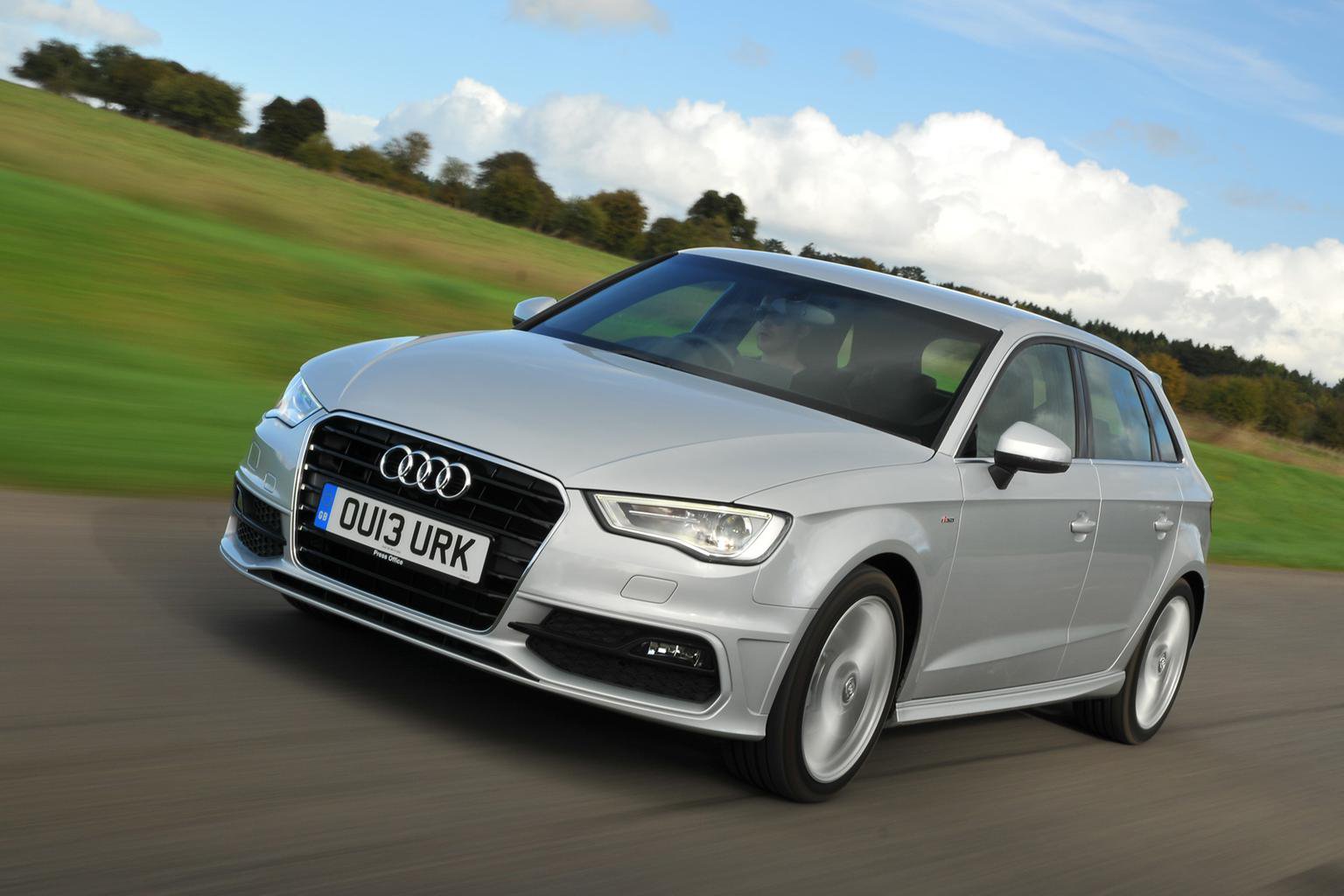 Audi’s A3 Sportback and Q3 both have high quality interiors, five doors, good-sized boots and space for four people on board, making them perfect family transport.

However, does the Q3’s tougher 4x4 looks and higher driving position mean it makes more sense, or does the A3’s latest-generation technology give it the edge?

What are the A3 and Q3 like to drive?

As you’d expect, the A3 and Q3 share some engines, both petrol and diesel, but some stand out more than others. The best of the A3’s engines we’ve tried is the 120bhp 1.4 turbo petrol. It has all the power you’re likely to need and pulls smoothly from low revs.

Otherwise, we’ve driven only diesels so far. The entry-level 103bhp 1.6 seldom feels underpowered and it has a smooth power delivery. The 148bhp 2.0-litre is very strong across the rev range, and while the 181bhp version has a more noticeable surge as the turbo kicks in, it’s still an absolute peach.

Petrol power in the Q3 consists of an entry-level 1.4-litre turbo, but we’ve yet to drive it. A pair of turbocharged 2.0-litre units sit above that, with 168bhp and 210bhp. The 2.0 engines are strong, but in reality we’d wager the 1.4 is more than capable of hauling the Q3, its occupants and their luggage in and out of town.

Diesel power suits the Q3 better, though. The 168bhp 2.0 TDI version feels so brisk that it renders the 208bhp 2.0 TDI version virtually pointless. Even then, if you’re not set on having the four-wheel-drive systems of these higher-powered cars, we’d stick with the front-wheel-drive, 138bhp 2.0 TDI: it’s punchy and offers better fuel economy.

If comfort is your top priority, you might think the SUV would be the best bet. In fact, though both cars deal with broken surfaces well in town; the A3’s ride remains more composed at high speed. However, to achieve this, you need to stick with the most comfortable SE suspension, which comes as standard on SE cars or can be chosen as a no-cost option on models higher up the range.

For those who appreciate a fun drive, the A3 is also the better choice. Both cars grip well and have nicely weighted steering, but while the Q3 has good body control, the A3’s lower centre of gravity makes it more agile.

Both cars are fine cruisers. There’s a little road noise in the Q3’s cabin at speed, and the A3’s door mirrors tend to whip up some wind noise, but it never rises to annoying levels and all engines settle well on the motorway. The cars’ pedal weightings and gearchanges are equally well judged, too.

What about automatic gearboxes?

Audi hasn’t messed around when it comes to auto ‘boxes; every single engine in the A3 and Q3 ranges can be paired with one. All of the Q3 models get seven-speed autos, as do the smaller petrol and diesel engines in the A3. The 1.8 petrol or any of the 2.0-litre engines get a six-speed version.

All are smooth-changing and rarely get caught out by sudden acceleration or braking, but bear in mind that CO2 emissions and list prices head north when you spec an auto 'box. Not good news for company car buyers.

Both cars have high quality cabins, with plenty of premium soft-touch plastics used in key areas. However, being the newer model, the design and damping of the A3’s switchgear takes that premium feel to the next level, and the more logical layout makes them easier to use, too.

Drivers of both cars will be able to get comfortable in no time. There’s a huge range of adjustment on both driver’s seats and plenty of reach and rake adjust to their steering wheels. Seeing out won’t be a problem, either, because the A3 and Q3 both have thin pillars and low window lines. That said, the Q3’s higher driving position will give the driver a greater chance of seeing over low objects.

The Q3 doesn’t offer the sort of space you might expect, given its SUV looks, though. True, there’s more headroom in both the front and rear of the cabin than in the A3’s, and access through the rear doors of both cars is good, but there’s slightly less rear legroom and shoulder room, so families with older children are better off in the family hatchback.

How about the boots?

Officially, the Q3 wins on boot space; its 460-litre boot (with no spare wheel fitted) is a useful 80 litres larger than the A3’s. It’s wider inside, too, and has a broader opening, making it easier to slot bulky items such as pushchairs and golf clubs inside. The A3 will keep taller items hidden beneath its parcel shelf, though.

Which boot is cleverest is a closer race, because both get practical touches such as cubbyholes, bag hooks and straps. The Q3’s boot floor sits flush with its opening, and the floor is reversible, with a hardwearing plastic side, making it easy to rinse down. There are some useful storage compartments beneath the floor, too.

The A3 responds with a fully height-adjustable boot floor that can be set at different levels depending on how much luggage you need to carry, and while it might not be as wide, at least you don’t have to haul heavy items as far from the floor to place them in the A3’s boot.

Which trim should I go for?

Q3s also start with SE trim, and again it’s the one to go for, as Bluetooth, 17-inch alloy wheels, climate control, auto lights and wipers and rear parking sensors are all included.

I like the sound of the gadgets, but how easy are they to use?

The A3’s standard 5.8-inch colour screen is controlled via a rotary dial on the centre console. It’s a brilliantly easy system to use, controlling everything from the radio to making calls and streaming music through your mobile phone. Connecting your phone in the first place is a doddle, too.

Spending £1495 (£1615 on SE models) gets you Audi’s technology package, which includes sat-nav, a larger seven-inch colour screen and the ability to manually write in address and phone numbers on a touchpad located on top of the rotary dial. It simple to use, and the sat-nav menus aren’t confusing to navigate, either. It’s a pricey option, but well worth the extra if you can afford it. Sat-nav is available on its own at £495.

The Q3’s infotainment is based on a slightly older design. It’s still easy to get your head around, though. There’s a larger 6.5-inch colour screen as standard, but there’s no Audi MMI rotary controller on the centre console. Instead, everything is controlled using a small dial and buttons on the upright dash – a trickier proposition when on the move.

Like the A3, the Q3 can be specced with a Technology package, which costs £1495 on SE and S-line models, and £1000 on S-line Plus cars. It brings sat-nav, a 20GB hard drive for storing your music and a DVD player (S-line Plus cars forgo the sat-nav as it is already standard). If you’re most interested in sat-nav, we’d recommend you spec it separately, again at £495.

Are there any other options I should be looking to add?

Audi’s Comfort package is relatively good value for the A3, as it adds automatic headlights and wipers, parking sensors and cruise control for £605 – useful extras that will make your A3 easier to live with, and easier to sell when the time comes.

For an inexpensive £225 you can upgrade the A3’s stereo system. It ups the speaker count to 10 and adds a subwoofer to the boot.

The Q3 has so much standard equipment there isn’t much else we recommend adding. For even easier parking, though, it may be worth spending £250 on front parking sensors on SE and S-line cars.

I want to keep my family safe. How do the A3 and Q3 compare here?

Both the A3 and Q3 get five-star Euro NCAP safety ratings, but a closer look reveals the A3 scores better for both adult and child protection. The A3’s lower-slung profile and standard active bonnet safety feature makes it much safer for pedestrians, too, as shown by the 22% difference in the two car’s NCAP pedestrian safety scores.

Both cars get driver and passenger airbags, front side airbags and curtain ’bags, but the A3 goes one better and adds a driver’s knee airbag to that list. Rear side airbags can be added at a cost of £300 in either model.

The Q3 is an older model than the A3, which shows in the available safety technology. While the Q3 can be had with Audi Side Assist (£450), which acts as a blind spot warning system, and Audi Active Lane Assist (£450), which will alert you if you begin to wander out of your lane, the A3 offers a much wider range of features as well as these.

For £575 the A3 can be equipped with adaptive cruise control, which can automatically speed up or slow down the car in order to maintain your distance from the car in front on the motorway, or avoid a collision completely in town at speeds under 19mph.

In fact, unlike the Q3, for £1450 you can have Audi’s Driver Assistance Package, which comes with adaptive cruise control, blind spot warning, lane assist, high beam assistance, front and rear parking sensors and automatic headlights and wipers bundled together.

Both cars come equipped with an alarm and immobiliser, and security firm Thatcham has awarded each car a five-star theft-of rating and four-star theft-from rating.

What about running costs?

Audi models hold their values better than most, and the A3 and Q3 are examples of some of the best in their respective classes. Ultimately the Q3 holds more of its value over three years, but it’s a close-run thing.

There are four-figure discounts to be had on both models, but the A3 is newer and more in demand, so it’s no surprise that you’ll be able to haggle a bigger saving off the Q3’s brochure price.

The A3 counters with better fuel economy and CO2 emissions across the range, as well as lower list prices, which, as mentioned, also gives it much lower company car tax costs.

All in all, whether you’re a private or company buyer, the A3 is a much cheaper car to buy and run.

So, which should I buy?

If you like the image and quality Audi cars offer, both the A3 and Q3 are hard to fault. Both, too, have enough space inside and a big enough boot to suit most families.

Even so, it’s the A3 that will make the most sense to most people. Not only are you getting the latest generation of Audi’s engine and infotainment technology, the A3 is also sharper to drive, has a more composed ride at high speed, performed better in safety tests and is cheaper to buy and run.

Unless you really value the four-wheel-drive image and high driving position of the Q3, it makes little sense given how complete the A3 is.