We voted the previous Audi TT our Coupe of the Year six years running, so this new model has a lot to live up to. Here it goes up against Peugeot's excellent RCZ R and the Seat Leon SC Cupra 280... 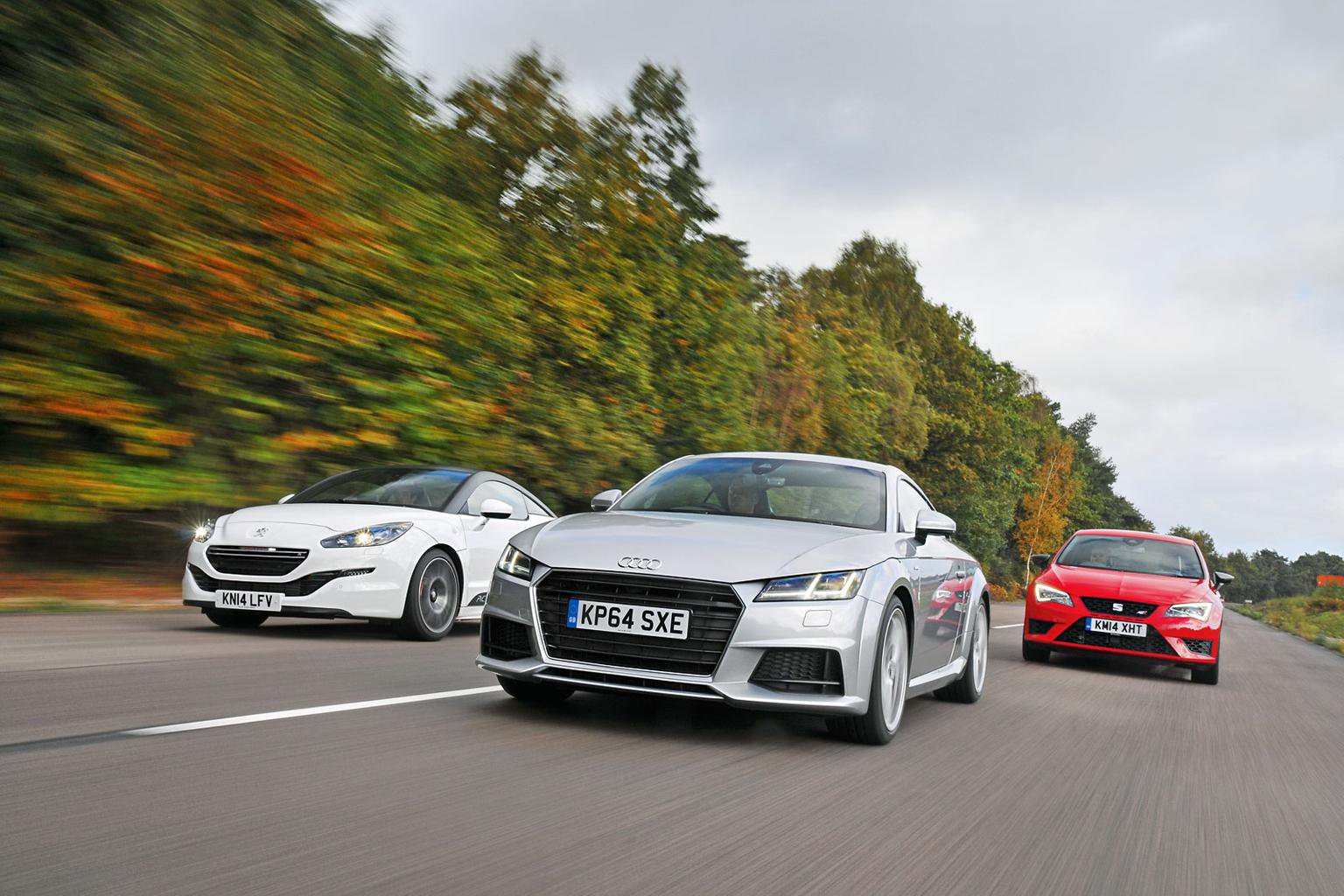 Previous TT was our Coupe of the Year six years running, so this new car has a lot to live up to.

The RCZ has always had the looks, but this range-topping R model is also great to drive.

Hot hatch meets coupe. The Cupra packs the most powerful engine and costs the least.

The new Audi TT will have to really go some to match the success of its predecessor, which picked up our Coupe of the Year award in all but the final year of its production run.

Mind you, the signs are good, because this all-new model is lighter and stiffer than the car it replaces, and in entry-level 2.0 TFSI form – as tested here – it has a healthy dollop of extra power.

To find out if it's the best coupe for those with a budget of around £30k, we're pitting it against the RCZ R – the range-topping version of Peugeot’s stunning coupe, and a car with more power and more standard kit than the Audi.

The TT will also have to beat Seat’s Leon Cupra, which costs thousands less to buy yet blends the looks of a coupe with the practicality of a hatchback.

These coupes will attract plenty of potential suitors simply because of the way they look, but it’s the way they drive that’ll play the biggest part in deciding the outcome of this test.

There isn’t much to split the trio when it comes to outright performance, with all of them accelerating from 0-60mph within a tenth of a second of each other. The TT is fastest from 30-70mph largely because it’ll cover the dash in second gear, although its lanky gearing means it doesn’t pull quite as eagerly from low revs as its rivals.

There are bigger differences through the corners, and it’s here that the lightweight TT really shines. Its strong grip and beautifully balanced chassis allow you to carry serious speed in to bends, while the light but accurate steering gives you the confidence to place the car exactly where you want it.

You have to adopt a completely different approach in the Peugeot. Tackle a corner at the same speed as in the Audi and you’ll slide wide; instead you need to use the RCZ’s staggering ability to claw its way out of the bends to make up for lost time.

This talent is largely thanks to the RCZ’s limited-slip differential, which allows you to hold your chosen line securely as you feed in the power. It’s just a pity the vague and numb steering stops you feeling a little more involved.

The Leon also has a limited-slip diff, but it’s nowhere near as effective as the Peugeot’s. The front tyres are all too eager to surrender grip through tight twists, limiting how quickly you can go round them, and the Seat also struggles to gets its power to the road out of slow bends. What’s more, the Leon’s steering doesn’t give you a great sense of connection with the front wheels, while its relatively high-sided body leans the most.

Switch to Comfort and the Cupra’s adaptive suspension keeps the ride relatively supple. Our test TT was on optional 19-inch wheels yet still smothered bumps well enough – especially on the motorway. Even the Peugeot never borders on being uncomfortable, although it’s certainly the firmest of the three.

It might be gentle evolution on the outside for the new TT, but it’s a complete revolution inside. The first thing that strikes you is how free from clutter the dashboard is, with just a handful of clearly labelled buttons set neatly into the fascia. This minimalist approach has been made possible by positioning the main screen – which displays everything from the stereo and sat-nav to the instrument dials – behind the steering wheel.

This is largely good news because it means you don’t have to divert your eyes far from away road to see it, while the huge 12.2-inch display is bright and clear. However, it does mean your passenger can’t help out with tapping in a postcode or choosing a radio station.

The quality of the new TT’s interior utterly shames its rivals’. Every surface is trimmed with seriously plush materials and the gaps between panels are practically non-existent. Meanwhile, the Peugeot’s
cabin looks a good deal sportier, with its leather-wrapped dashboard and yards of red stitching throughout. Things aren’t bolted together quite as solidly as they are in the Audi, but the RCZ’s interior doesn’t feel at all cheap.

The same can’t be said for the Seat. Its interior looks desperately dull, and some of the switchgear – such as the controls for the air-con – feel a bit flimsy. The Leon also has the least supportive seats, which aren’t as comfortable as the Audi’s or Peugeot’s and don’t hold you in place as securely through corners.

However, the Cupra’s hatchback roots mean it’s easily the most practical of the three. For one thing, it’s the only one of the trio in which you can feasibly carry four people (the other two cars do have rear
seats but they’re next to useless because of their incredibly tight legroom and headroom).

The Leon also has the biggest boot, although you’ll still easily fit the week’s shopping in the back of the other two. You can even squeeze a set of golf clubs in the TT and RCZ if you fold down their rear seatbacks, although the Peugeot’s aren’t split.

There's a huge 12.2-inch screen behind the steering wheel, which is great for the driver. The rotary control between the front seat is intuitive and the raised shortcut keys allow you to quickly change functions. It’s disappointing that you have to pay £1795 for satellite-navigation, though.

7.0 inch display is mounted high on the dash, close to driver’s eyeline. However, the menus could be more intuitive, and the controls – mounted on the dashboard – are fiddly and hard to reach. You get sat-nav as standard, but DAB isn’t available, even as an option.

You get loads of standard gadgets, including nav and a DAB radio. Touch-screen interface is relatively intuitive, but there’s often a delay between you pressing the screen and the system responding. A more powerful stereo is available
for another £255.

The Leon has the lowest list price by more than £2500, and that gap grows to a whopping £4500 after you’ve factored in the generous discounts Seat dealers are willing to offer.

However, despite this, and the fact that Audi dealers aren’t prepared to barter, it’s actually the TT that will cost you the least to own over three years. This is mainly down to how slowly it’s predicted to depreciate, but also because it’s the most fuel-efficient of the trio in real-world driving.

Meanwhile, the Peugeot is the most expensive to buy initially, and it remains that way after all the ownership costs you’re likely to face have been factored in. Expect to spend around £4000 more to own the RCZ over the Audi or the Seat.

It’s a similar story for company car drivers, where the TT again works out cheapest. Its relatively low CO2 emissions mean that, over three years, it will cost you around £300 less the than Leon in benefit-in-kind (BIK) tax. The Peugeot will cost you £1180 more than the Leon.

The RCZ isn’t cheap, then, but it does go some way towards making up for that by being well equipped; sat-nav, climate control, rear parking sensors, cruise control and automatic lights and wipers all come as standard. The Leon goes even further, with all of the above plus front parking sensors and full LED headlights, whereas all of these things costs extra on the Audi.

The TT counters with keyless start and a lane-assist system that can automatically help keep you in your lane on the motorway. An optional Comfort and Sound pack is also available, which adds a Bang & Olufsen sound system, rear parking sensors, climate control and a front armrest for £1590.

The previous TT was always going to be a tough act to follow, but this new model doesn’t disappoint. It’s grippy, fun and seriously agile, and the fact it’s lighter than its rivals makes up for its relative shortage of power.

It’s not just how good the Audi is to drive that wins it this test, though. Its interior has a high-tech and user-friendly layout, and sumptuous materials that wouldn’t look out of place in a high-end luxury car.

It’s not perfect; the gearshift has a longer throw than we’d like and you’ll almost certainly want to spend extra on options, such as satellite-navigation and parking sensors, but when you consider the TT is the cheapest of the three to own privately or as a company car, it’s actually something of a bargain.

Second spot goes to the RCZ R. It’s easily the best-handling car Peugeot has built in the past
20 years, and transforms what’s a pretty mediocre coupe in standard form into a proper performance car. Admittedly, its steering isn’t great and its boomy exhaust - while entertaining when you’re in the mood - is tiresome when you’re not. However, it’s rabidly fast and well equipped, so is worth a look if you’ve fallen for its styling.

On paper, the range-topping Leon SC should be brilliant, because it’s the most powerful car here and the cheapest to buy. Sadly, it’s let down by wayward handling, poor traction and a cheap-feeling cabin. Yes, it’s the most practical, but that’s not what most coupe buyers tend to prioritise.

Verdict Brilliant to drive and to live with. Easily the best coupe on the market

Verdict The best-driving Peugeot in decades. Worth a look if you can afford it

**For** Loads of kit; easily the most practical; cheapest to buy

Against Traction out of corners; fake engine noise; steering