More for you |
What Car?'s top 10 used electric cars (and the one to avoid)10 most unreliable SUVsWhat Car?'s best cars for less than £250 per monthGuaranteed discounts on our 2020 Award winners - save up to £19,366Skoda Kamiq long-term test review
Home
News
Chevrolet
news 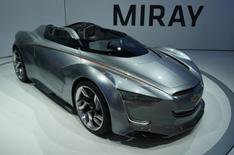 Chevrolet has revealed three cars at Frankfurt, although none of them are likely to reach UK showrooms any time soon.

Miray
The Miray concept car which was first unveiled at the Seoul motor show in March is more of a showcase for Chevrolet's future design and technology than the basis for a production model.

Miray is the Korean word for future, and Chevrolet says the roadster which is powered by two electric motors and a 1.5-litre petrol engine 'takes a fresh look at what a sports car of the future might be.'

'Many of the components used in its drivetrain are an extension of our systems,' it adds. 'The Miray demonstrates the potential for rescaling and extending today's propulsion technologies.'

The company calls the car's drive system 'mid-electric' power from the front-mounted electric motors can be switched between the front and rear wheels, while the turbocharged 1.5-litre, four-cylinder petrol engine provides extra power for 'performance driving.'

Chevrolet says that the concept has been influenced by past models particularly the 1962 Corvair Super Spyder and the 1963 Monza SS but the angular styling, carbon fibre body and LED lights are bang up to date.

The Miray's high-tech interior includes a carbon fibre shell, while there are retractable rear-view cameras instead of traditional door mirrors.

Although a production version of the Miray is unlikely, Chevrolet says that aspects of its design and drivetrain are expected to filter through to future production models.

Malibu
The new Chevrolet Malibu is making its European debut at Frankfurt.

The mid-sized four-door family saloon was unveiled in April this year, and is due to go on sale in Europe during 2012 to act as the company's flagship model.

Outside, the design features Chevrolet's usual dual-port grille, while the cabin has a 'dual-cockpit' design, a seven-inch touch-screen radio display and no less than eight airbags as standard.

The Malibu will be sold with either a 162bhp 2.0-litre petrol engine or 167bhp 2.4-litre diesel. Each will be available with either a manual or automatic gearbox.??

Chevrolet says that a decision on whether the Malibu will go on sale in the UK has not yet been reached. If it does, it will be pitched as a keenly priced rival for the Ford Mondeo and Vauxhall Insignia.

Strip away the concept car's extra lights, fancy paintwork and roll-bar and give or take a few details this is how the production model will look.

The new Colorado is due to go on sale in summer 2012, but the current model isn't on sale in the UK, and Chevrolet is yet to confirm whether the new model will be launched here.