* Second-generation Audi A3 problems * Reliability issues and recalls explained * Read this before you buy... 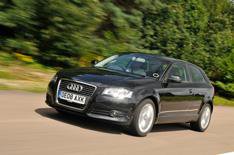 Here we look at common problems that can afflict the popular Audi A3 range. We'll be concentrating on cars built from 2003-2012, so make sure you read our guide before you head out to buy on the used market.

The second-generation A3 was available with a wide selection of engines across all bodystyles. Originally, the entry-level petrol was a 1.6-litre engine, but 1.2- and 1.4-litre units were introduced later. Higher up the range there were 1.8-, 2.0- and 3.2-litre petrol engines.

Five- and six-speed manual and automatic gearboxes were available across the range, and some of the more powerful petrol and diesel variants came with four-wheel drive.

The A3's cabin was well made if a little uninspiring. The face-lifts improved this perception, while maintaining the high-quality feel.

A variety of trims were available, ranging from the standard model up to the sporty S line specification. After 2008, all models came with electric windows and air-conditioning - prior to this, entry-level models missed out on most of the kit that you'd expect in such a premium car.

Sports suspension was available as part of S line trim, but is best avoided because it makes the ride harsh. We prefer SE trim, with its good level of specification and more comfortable standard suspension.

The second-generation Audi A3 is a great car, but there are some common problems that buyers should look out for. These issues should have been fixed by Audi, so make sure the work has been done before you buy.

Audi A3 fuel leak problem ('08-'11)
Some 2.0-litre TDI models that were built between 2008 and 2011 can leak diesel. This problem affects only the 2.0-litre common-rail diesel engines. Audi resolved this issue by fitting anti-vibration weights to the fuel pipes.

Audi A3 direct-shift clutch problem ('08-'09)
Direct-shift transmission is Audi's twin-clutch automatic gearbox. On a number of cars built during 2008 and 2009, there was a fault with the clutch temperature gauge that could cause the car to lose power because the clutch would engage. This was rectified by Audi reprogramming the faulty gearboxes.

Audi A3 Sportback curtain airbag problem ('05)
The curtain airbags on some Audi A3 Sportback models built in 2005 had to be replaced by Audi due to a fault that meant they might not inflate if the car was involved in an accident. The problem was caused by a faulty seal, which would allow gas to escape from the gas generator.

Audi A3 flywheel problem ('03-'05)
The flywheel is the part of the clutch that connects to the engine. The flywheel on models built between 2003 and 2005 could become damaged. This means the flywheel may fail completely and in the worst-case scenario cause a fire. Audi recalled cars that were affected and replaced the flywheel to prevent this occurring.