More for you |
DVLA warns of 20% increase in car scamsWhat Car?'s top 10 used electric cars (and the one to avoid)10 most unreliable SUVsWhat Car?'s best cars for less than £250 per monthGuaranteed discounts on our 2020 Award winners - save up to £19,366
Home
News
Common Mercedes C-Class ('07-) problems
news 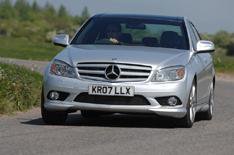 Mercedes introduced the C-Class in 1993 as a direct replacement for the popular 190 range. It remained the entry-level Mercedes model until 1997 when the A-Class was launched. Well be focusing here on cars built from 2007 onwards.

The third-generation C-Class was launched in 2007, and was initially available as a four-door saloon and a five-door estate. The petrol line-up comprised 1.6-, 1.8-, 2.5-, 3.0- and 3.5-litre engines. The diesel options were a 2.1-litre in various states of tune or a powerful 3.0-litre unit. An automatic gearbox is available as an option on every engine.

The C-Class was given a face-lift in 2007, with revisions including new LED lights, stop-start technology and new seven-speed automatic gearboxes.

There are several common problems suffered by the Mercedes C-Class. These issues should have been fixed by Mercedes, so make sure the work has been done before you buy.

Mercedes C-Class stability problem (2007-present cars)
Some models built during 2008 may have stability issues while on the move. This is because faulty Active Body Control acceleration sensors may have been fitted. This has the potential to cause vibrations at the front axle, which can impact on driving stability.

Mercedes C-Class engine failure problem (2007-present cars)
A number of early cars have had problems with their engines failing. An electrical connection in the crankshaft sensor may be interrupted, which could result in a loss of power and problems restarting the engine.

Mercedes C-Class power steering problem (2007-present cars)
A power steering issue affects some cars built during 2010. The power steering fluid could leak from the connection of the fluid line to the pump. Drivers will hear a noise while the vehicle is being driven.

Mercedes C-Class brake problem (2007-present cars)
Some cars built during 2010 had issues with their brakes. They may not have been fitted with the correct-specification brake disc, which in extreme cases could mean reduced brake efficiency in the event of an emergency stop.

Mercedes C-Class fuel leak problem (2007-present diesel cars)
A number of cars built between January 2009 and December 2011 have experienced fuel leaks. Leaks in the plug area of the drain opening may occur at the fuel filter with integrated fuel heaters.

Mercedes C-Class air hose problem (2007-presents cars)
Some models built between August and December 2011 have faulty air hoses. Cracks in the air hose can put the engine into limp-home mode. In some cases the engine may shut off altogether.

Mercedes C-Class key problem (2007-presents cars)
Some owners have complained that their electronic remote keys have stopped working, leaving them stranded. Make sure any used example you're considering comes with two keys, because its rare for both to fail.