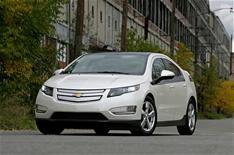 A global corporation is to buy 25,000 electric cars in an attempt to kick-start the fledgling market.

General Electric (GE) will initially buy only Chevrolet Volts, but will widen its electric fleet to include other manufacturers cars as and when they become available.

GE will use some cars as company vehicles, while leasing others to corporate customers.

The company has said it intends to buy all the cars by 2015 and hopes this will drive the development of a network of charging points and other products, which it manufactures.

12,000 Volts
The companys first order will be for 12,000 Chevrolet Volts, which go into production later this month.

GE predicts the electric-car market could be worth 310 million to the company over the coming three years.