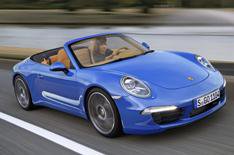 The new Porsche 911 Carrera Cabriolet arrives in plenty of time for next summer, with first deliveries expected in March.

Just like the new 911 Coupe, the Cabriolet has a longer wheelbase, revised powerplants that are more powerful and more fuel-efficient, and lighter bodywork than the car it replaces.

The fabric roof is fully electric and is lighter than the hood in the previous model, thanks to the use of magnesium in the roof's frame.

The engine line up comprises a 3.4-litre flat-six engine producing 345bhp (Carrera) and a 3.8-litre motor producing 394bhp (Carrera S). Both models have a new seven-speed manual gearbox, while a seven-speed PDK semi-automatic gearbox is optional.

More details about 911 Cabriolet are expected to be revealed when the car makes its public debut at the Detroit motor show in January, however prices have been announced.

Porsche Boxster
What is it? Third generation of drop-top should be more mature
Price from 38,000 (est)
On sale June

Porsches small roadster grows for its next generation, which will debut in the spring before going on sale in June.

The increase in length and wheelbase is designed to allow Porsche to slot in a new, smaller convertible that will share components with a small VW roadster and the Audi R4.

Thanks to mainly aluminium bodywork the bigger Boxster is lighter than the car it replaces. Front-end suspension is similar to that in the latest 911. It also gets that cars electric power steering.

Engines will still be 2.9-litre and 3.4-litre flat sixes, mated to six-speed manual or seven-speed PDK dual-clutch transmissions, but power will rise and both fuel consumption and CO2 emissions will be cut. Later on, the Boxster could also get a four-cylinder engine; Porsche is working on a turbocharged boxer motor that would help lower the cars CO2 emissions further.