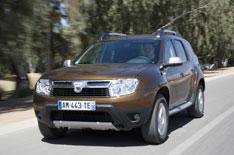 Budget manufacturer Dacia is planning three new models in 2012 - but only one of them will be used for the brand's launch in the UK in January 2013.

The Romanian firm, which is owned by Renault-Nissan, has a quiet stand at Frankfurt, with no major launches, but it is planning a family car, and MPV and a small van for next year.

However, only the first of that bunch - the replacement for the current Sandero hatchback - will be part of the initial UK line-up in 2013. It will join the Duster, Dacia's highly rated crossover, which has sold at more than double the expected rate across Europe.

Renault UK dealers are said to be frustrated at the length of time it's taken to bring Dacia to the British market - particularly since the current economic squeeze could suit the firm's aggressive pricing strategy.

Sources already indicate that the cheapest Duster could dip beneath 10,000 in UK dealers, allowing it to potentially offer a Focus-size cabin but undercut even a Fiesta on price.